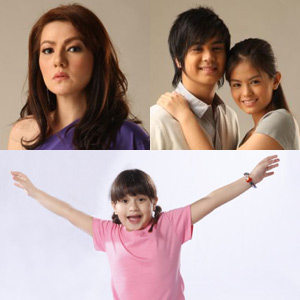 "Based on partial October data (until October 13; October 9 to 13 based on overnight readings), GMA recorded its highest nationwide ratings margin over competition in total day household audience shares by an impressive 7.4 points with 35.8 points versus ABS-CBN's 28.4.

"The lead resulted from the Network's improving ratings across all timeblocks, most notably in primetime.

"In the morning block (6am to 12nn), the Kapuso Network more than doubled its national ratings lead against competition from 4.1 points in September to 9.2 points in partial October.

"On primetime (from 6pm to 12mn), GMA continued to increase its base of nationwide audiences as it substantially reduced competition's margin in partial October.

"Kapuso programs on weekdays and weekends continued to dominate the lists of overall top 15 programs in the key areas of Mega Manila and Urban Luzon. These programs include Iglot, Amaya, Munting Heredera, Time of My Life, Kapuso Mo, Jessica Soho, and Pepito Manaloto.

"Banner newscast 24 Oras anchored by Mike Enriquez and Mel Tiangco, continued to be the most watched newscast in the audience-rich areas of Urban Luzon and Mega Manila; and further reduced competition's margin in Urban Visayas and Urban Mindanao in partial October.

"GMA Network posted a 22% growth in consolidated gross revenues from regular advertising and subscription accounts in the first half of 2011 compared to the same period last year."