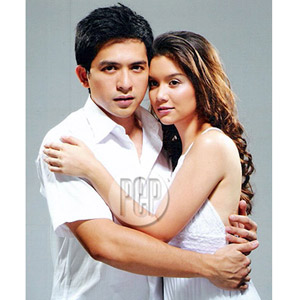 Dennis Trillo and Nadine Samonte star in the drama series Kung Mahawi Man ang Ulap after working together in the fantaserye Super Twins.

Right on the heels of the first two Sine Novelas Sinasamba Kita and Pati Ba Pintig ng Puso?, GMA-7 brings to light another blockbuster film in the ‘80s now turned into a television series that features an emotionally gripping story about love, family, revenge and betrayal—Kung Mahawi Man Ang Ulap.

The compelling love story of Kung Mahawi Man ang Ulap—a 1984 blockbuster starring Hilda Koronel, Christopher de Leon, and Amy Austria—is about a young wealthy woman named Catherine (Nadine Samonte) and her rich boyfriend Stan (Dennis Trillo), who comes home from the United States to marry his long-time girlfriend. The young couple already announced their engagement and with their wealth, expect a bright future for their family.

But before their expected wedding, Stan and Catherine's fate changes drastically with the intrusion of Pablo (Gardo Versoza) and his children Rita (Iwa Moto), a sexy young lady who uses her beauty and body to get what she wants; Jojo (Jeremy Marquez), an arrogant guy who likes girls and always gets into trouble; and the spoiled brat Chona (Hazel Ann Mendoza).

Pablo and his family are from Mindanao. A storm had ravaged their house but they don't have enough money to survive. Pablo, a lazy drunkard who wants to get rich but refuses to work, is faces a huge debt. He then comes across the announcement of Catherine's engagement and discovers that she is the daughter of his first love, Minda (Glydel Mercado), who has been widowed.

The devious and scheming Pablo goes to Minda with his three children and tells his ex-girlfriend of their plight. Minda, who still loves Pablo, offers to help them, which Catherine firmly opposes. Unknown to Minda, her decision to let Pablo's family move into their house leads to Catherine's sufferings and even ruin her engagement with Stan.

With Rita setting her eyes on Stan, Jojo is sexually attracted to Catherine. With Minda marrying Pablo, will Catherine be able to withstand the troubles and miseries caused by Pablo's family? Will Minda help Catherine get through all ordeals or will she betray her daughter in favor of her new husband? And will true love keep Stan and Catherine together?