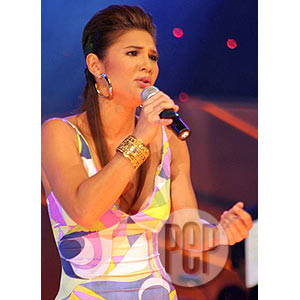 IKON Philippines will air its grand finale live this Sunday, August 5, on RPN-9 at 7 pm. The winning solo artist and band will represent the Philippines in the ASEAN Grand Finals to be held on August 12 in Kuala Lumpur, Malaysia. Vina Morales (in photo) is one of the six soloists who will compete for the championship this Sunday.

Who will be the next icon in the ASEAN music industry?

Followers of IKON Philippines braved the rains last July 28 at Le Pavilion, Pasay City, to watch the semi-finals of this reality song competition that airs every Sunday on RPN-9. This TV show had eight solo artists and ten bands battling it out in their respective categories. The competition opens the way to Asian stardom. It's the first-ever clash of the icons on television that showcases established, professional and well-known artists as nominees.

During the semi-finals, Skarlet distinguished herself by singing "Anguish," a song she wrote for a friend who lost a child. Vina Morales gave her powerful rendition of "All that I want, all that I Need," while Julianne wowed the judges with "Grateful".

The complete list of semi-finalists in the soloist category are Skarlet, Julianne, Sitti, Noel Cabangon, and Vina Morales. The band category semi-finalists include The Dawn, Kjwan, Kala, Sponge Cola, True Faith, and Chicosci.

The roster of competitors reads like a Who's Who in Philippine music. The line up of artists in the soloist category also included Grace Nono, Chris Cayzer, and Top Suzara. For the band category there's also Greyhoundz, Chillitees, Kapatid, and Stone Free.

Grace Nono told PEP (Philippine Entertainment Portal) that, "IKON is a great way for us [artists] to meet each other. I've never been a competitor myself. If you watch American Idol or Philippine Idol, it's life and death. Here, it's more of a friendly atmosphere."

The alternative-music singer echoes the sentiments of artists who believe that it's hard to judge between the diverse bands and soloists who have all made a name for themselves. Grace also laments the fact that there are singers and artists who are appreciated more abroad than locally.

The IKON Philippines jury is composed of Wally Gonzales of Juan Dela Cruz fame, Vince Parr of WOLFPAC as well as songwriter and composer Eugene Villaluz. Danny Javier was a guest judge for the semi-finals competition.

IKON Philippines will air its grand finale live this Sunday, August 5, on RPN-9 at 7 pm. The winning solo artist and band will then compete in the ASEAN Grand Finals on August 12 in Kuala Lumpur, Malaysia.

IKON involves three countries namely, Philippines, Malaysia and Indonesia. Representatives from each country will compete in an international competition. The ASEAN Secretariat has commended IKON for its efforts "to promote music across borders and raise awareness of the diversity of music in the region, as well as promote the development of local and original music in the ASEAN region."