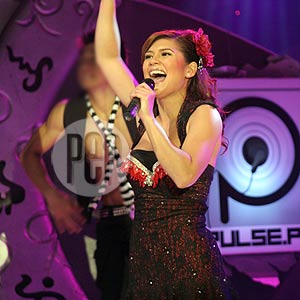 Vina Morales (in photo) will represent the Philippines in the soloist category of IKON ASEAN Finals, which will take place in Malaysia on August 12. Kjwan (not in photo) will compete in the band category of the contest.

Vina Morales didn't allow a bad microphone to stop her winning performance in the recently concluded IKON Philippines last Sunday, August 5, at the Le Pavillion, Pasay City. Vina kept her poise and continued her dance steps in spite of the technical difficulty, which endeared her even more to the audience.

By winning the soloist category of the reality song competition, Vina has earned the right to represent the Philipppines in the IKON Finals that will take place in Kuala Lumpur, Malaysia. The show will be aired on RPN-9 on August 12. She will compete against representatives from Indonesia and Malaysia.

Vina sang her hit "Let's Dance" from her album Total Control. Her competitors, bossa nova artist Sitti sang "Ikaw Lamang" while jazz temptress Skarlet sang her song "Skarlet," complete with a horn section and dancers leaping into the air. Each of them gave amazing performances in the finals of IKON Philippines.

In the band category, Kjwan won the with their hit "Invitation," culled from their second album Two Step Marv. Other band finalists that night were True Faith, which performed their song "Basta, basta" from their live album while Kala sang their trademark "Jeepney" which remade the Manila sound.

The complete roster of talents who participated in IKON Philippines included Grace Nono, Julianne, Noel Cabangon, Top Suzara, and Chris Cayzer for the soloist category. As for the band category, The Dawn, Chicosci, Sponge Cola, Greyhoundz, Kapatid, and Chilitees participated in this competition.

After her winning performance, Vina told PEP (Philippine Entertainment Portal), "Nakakanerbiyos 'yung nangyari sa mic. Pakiramdaman kami ni [musical director] Louie Ocampo. Then I felt that God told me, ‘You can do it.' And I got the energy from the crowd."

When asked about her current boyfriend Cedric Lee, she said she'd rather not comment on it. But had this to say, "Mahal ko yung trabaho ko. Whatever goes on in my personal life, ‘pag show time you can rely on me. I have to be professional. I do it to entertain people and that's what I'll do."

In the middle of the interview Vina got a congratulatory call from German Moreno and Pilita Corrales. Kuya Germs said, "We're so happy. We'll keep on praying for her in the KL Finals."

Pilita Corrales, her Cebuana kababayan said, "There's no one like Vina. You could see from her performance that she gives it her all." Pilita is famous as "Asia's Queen on Songs" since the late '50s.

Malaysians may already be familiar with the Cebuana's lovely face and her equally lovely voice. Vina's soap opera Darating Ang Umaga, wherein she co-starred with Eula Valdes, was aired in Malaysia several years ago. She also lent her voice for the theme song of the ABS-CBN teleserye Pangako Sa ‘Yo, which was also aired there.


The winner of IKON Philippines said she hopes the country will pray for her as she represents the country in Kuala Lumpur. Vina will also have a U.S. concert tour titled Showgirl from September to October.