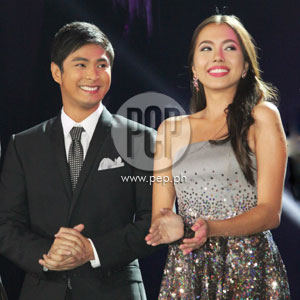 Coco Martin and Julia Montes will be paired for the first time in ABS-CBNs upcoming drama series, Walang Hanggan.

Released in 1991, Hihintayin Kita sa Langit is a local adaptation of an Emily Jane Brontë classic novel titled Wuthering Heights. The romance drama film was originally shot in scenic Batanes and starred Richard Gomez and Dawn Zulueta. The love team partners eventually fell for each other but they ended up marrying different persons: Richard is currently married to Lucy Torres while Dawn is the housewife of Representative Anton Lagdameo.

Directed by Jerry Sineneng and Trina Dayrit, Walang Hanggan tells the story of star-crossed lovers who have to deal with revenge and family feud. In the show, Richard is cast as a rich haciendero Marco who is smitten by a beautiful farm worker named Emily (played by Dawn). The couple promised to love each other through infinity but circumstances force them to break up. Emily ends up being jailed, prompting her to seek revenge on the family of Marco.

Walang Hanggan marks the return of Coco to the small screen after playing the dual roles of Alexander and Javier del Tierro in Minsan Lang Kita Iibigin. Meanwhile, Julia gained fame as the kontrabida Clara in Kapamilya show, Mara Clara. This TV series will also mark the return of Richard Gomez to ABS-CBN and the first time that former Kapuso star Paulo Avelino will be seen on a Kapamilya teleserye.

In an interview with Entertainment Live last December 31, Coco and Julia expressed their excitement for the show wherein they will bring life into the characters of Daniel and Katarina, respectively.

Is there a possibility of a romance between the two?


The matinee idol also pointed out that he feels pressure working with Richard Gomez, the lead star of the original movie.