Mara Clara, 100 Days to Heaven, and Mutya emerge as most watched shows in 2011 nationwide, based on Kantar Media data 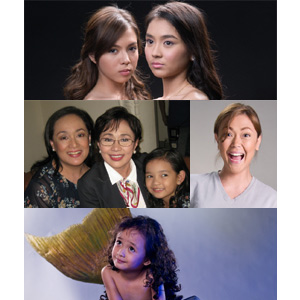 Based on Kantar Media data, the most watched programs nationwide in 2011 were (from top frame) Mara Clara, 100 Days to Heaven, and Mutya.

"ABS-CBN Corporation ended 2011 as the TV network with the most number of Filipino households watching its programs, especially on primetime when viewing levels peak.

"Based on Kantar Media data for full year 2011, ABS-CBN obtained a 42 percent national audience share for primetime (6PM onwards) when advertisers make most of its placements, or 12 points higher than GMA-7's 30 percent.

"TV Patrol," the only TV newscast to make it to 2011's top 10 programs, remained as the country's number one TV newscast with an average TV rating of 27.2 percent. Its competitor "24 Oras" was far behind at 24th spot with only 19.5% of Filipino households watching it last year.

"ABS-CBN registered a net income of P2.2 billion in the first nine months of 2011, while news media reported that GMA Network earned P1.58 billion net income in the same period.

"ABS-CBN shifted to Kantar Media/TNS after filing a case vs. AGB Nielsen Media Research for failing to comply with its request to investigate alleged cheating and data tampering in TV ratings. The case is still pending in court contrary to claims by GMA-7, which is not a party to the case, that it has been resolved."