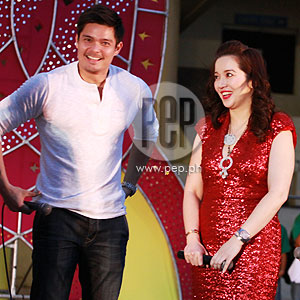 GMA-7 actor Dingdong Dantes (left) appeared as a guest on the January 8 episode of Gandang Gabi, Vice. He was joined by his Segunda Mano leading lady, Kris Aquino.

Kris appeared first to introduce her leading man, which bewildered and excited Vice Ganda. The audience went wild as the Kapuso actor made his entrance.

However, the actor wasn't present to receive his award at the 2011 Metro Manila Film Festival Gabi ng Parangal held last December 2011. They "recreated" the awarding ceremony that night as Vice Ganda handed over a trophy to Dingdong, which delighted both Kris and the audience.

Kris asked Dingdong what would have been his acceptance speech if he attended that night.

Dingdong also praised his leading lady by saying: "I'd like to commend your performance."

Did he find Kris intimidating? The actor admitted, "Siyempre naman."

Kris revealed that the first time she met Dingdong was at her show Kris and Tell sometime in 2000. She found him "very proper."

Vice Ganda learned that Dingdong was a "rocker" back in high school.

Having said that, Vice Ganda and Kris challenged him to perform. Together with a live band, the Segunda Mano star showed off the "drummer" in him.

Dingdong said with a smile, "Idol ko yung dalawang 'yon." He gamely sang a few lines of the song "Ipagpatawad Mo" and sounded like Janno Gibbs. The actor and Vice Ganda did a short duet of the song "Bakit Ngayong Ka Lang," which elicited a lot of cheer from the audience.

ON HIS RELATIONSHIP WITH MARIAN.

During the shooting of Segunda Mano, Kris and Dingdong became close friends. The Queen of all Media learned a lot about the actor whom she described as someone who "was never without a girlfriend."

Both Kris and Vice Ganda asked him to reveal the number of girlfriends he had in the past but Dingdong declined to comment like a true gentleman.

Vice Ganda naughtily asked Kris if Dingdong doesn't have a girlfriend, would he be interested?

Kris answered, "Kung walang girlfriend si Dingdong, honest to God talaga if I were 25, why not?"

The audience was given the chance to ask some questions to the Segunda Mano stars. Someone from the audience asked: "What keeps you charming?"

The actor replied, "Sa totoo lang, it's laughter. It's the people that I'm with. Kagaya ni Vice Ganda...sa totoo lang, Marian has a great sense of humor. Yung mga bagay na yan, keeps you smiling all the time."