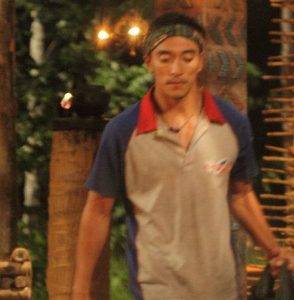 Stargazer, a noted Filipino psychic, visited the Apolaki camp last week and gave a personal "reading" to each member. She says her reading is based on personal "auras" exuded by each castaway.

During the latest Tribal Council, Survivor Philippines Celebrity Doubles Showdown host Richard Gutierrez asked the castaways for their feedback regarding the reading presented by Stargazer.

Gino dela Pena pointed out, "More on personal life yung para sa akin. It was something related to something that I was worrying habang narito pa ako sa island...Sinabi nga niya, 'you have to be more humane, parang mas maging human ka sa brother mo.' Tumutulong ako sa kanya but at the end of the day, nakakalimutan kong maging kapatid sa kanya. It helped me a lot."

KC Montero commented, "Sinabi niya stuff about business. I asked her a question: 'Who could I trust here among the castaways?' Watch out for someone who always watches you from a distance or from the corner of his or her eye."

Mara Yokohama told the Survivor host, "Sinabi lang niya sa akin maraming naghihintay sa akin and a lot of opportunities are coming my way when I get back."

Richard asked if Stargazer gave a prediction on who will be the next Survivor winner and Albert revealed: "Prominent daw ang mga letters na 'A' and 'J.'

On the other hand, Arnold voiced out, "It's hard for me to believe that stuff. I've got a letter 'A'. But alam ko dito sa Survivor, equal opportunity for everyone to win. I took it as a grain of salt and I think everyone has a chance like me."

The Survivor host then directed a question to Gino, John, Mara and Stef on how they felt being voted by fellow castaways in previous tribal councils.

Gino spoke up and admitted, "Masakit pero it's a game. At the end of the day, they were just protecting their tribe like how I would protect my tribe also."

Mara remarked, "Very recently, I found out also that there were some people trying to protect themselves. I also found out while figuring out na, some people na akala ko, kaibigan ko, behind my back, may plinaplano. So alam ko na talaga kung sino ang kalaban ko dito. I just felt bad kasi I thought I could trust that person."

During the previous tribal council, six of the castaways voted for Arthur Solinap to be out of the game. Richard from the castaways if there is a solid alliance in the tribe.

Rugby player John added, "At the end of the day, someone has to go home. Someone's next in line, di natin pwedeng itago 'yon."

Richard then asked KC if he thinks that he has become a threat to the group.

KC candidly replied, "Other from the obvious where everyone is a threat here. Yes, siguro. I'm a threat to the athletes here coz I'm athletic as well. I get along with everyone. Siguro, if they think that I'm part of the finals, the jury will pick me over them. It's natural. The alliance that I thought we had isn't there anymore."

What would be your basis for voting?

KC replied "For me, I just have to remember that this is a game. For me tonight, I'm gonna fight. Laban."

Arnold pointed out, "You base your vote behind the strategy behind the game. Nothing on this game is ever personal."

Who do you think the jury members will vote as "Ultimate Survivor"?

Gino remarked, "I guess kung makakalusot si Maey sa final two, she would. She's very likable and she really fought for where she is right now."

Richard's last question was "Who do you think will the jury not vote for at this point in the game?"

Arnold said, "I'd say myself. It's gonna be in the guys' heads sa nangyari sa Tala tribe tungkol kay Carlo..."

That ended the discussion and the castaways were asked to vote. Since Arnold won at the last challenge and had the immunity necklace, his fellow castaways cannot vote for him.

Mara and Stef each got a vote, KC earned 2 votes but John garnered 4 votes, making him the eighth Apolaki tribe member voted off. He joins Chuckie Dreyfuss and Arthur Solinap as member of the jury.