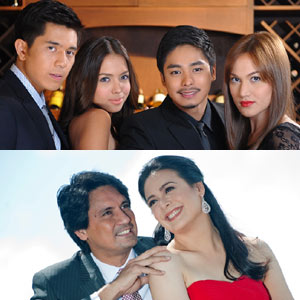 In his past TV projects, Coco Martin was seen playing heavy dramatic roles—he was the primary antagonist in Tayong Dalawa, while he played dual characters in Minsan Lang Kita Iibigin.

In Walang Hanggan, Coco and Julia Montes depict a love story of young sweethearts who come from different social strata. Katerina (Julia) comes from a rich family while Daniel (Coco) is a farm hand who is attracted to the heiress. Their love story becomes even more complicated by the presence of the characters of Melissa Ricks and Paulo Avelino.

It also tackles the undying love of two previous generations: the love triangle comprised of Virginia (played by Susan Roces), Margaret (played by Helen Gamboa), and John (played by Eddie Gutierrez); and the ill-fated lovers Marco (played by Richard Gomez) and Emily (played by Dawn Zulueta).


In this project, Dawn will revive her love team with ex-boyfriend, Richard Gomez. The actress says about her TV comeback: "The story was so great, that it was hard to turn down the role. Everyone can surely relate with the characters' journey."

While Dawn and Richard rekindle an old onscreen romance, this marks the first teamup of Coco and Julia. "This is a new challenge for me since this is the first time that I'll be doing a 'full love story.' But I'm getting inspiration from the fact that I'm working with the best actors and actresses of the industry," Coco was quoted as saying about his newest primetime series.

The main cast is supported by Rita Avila and Joem Bascon; with the special participation of Joel Torre. It is directed by Jerry Lopez Sineneng and Trina Dayrit.