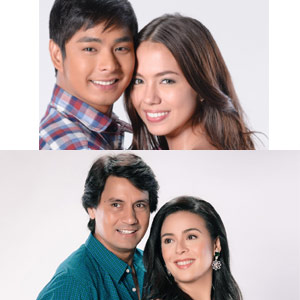 When Coco Martin was chosen to deliver pure "kilig" through ABS-CBN's Walang Hanggan, some thought that it was a tall order.

After all, Coco is known for his gritty and conflicted roles in movies
and TV—a massage therapist for gay men in Masahista, a police trainee forced to do an immoral act in Kinatay, a gunman and syndicate head in Tayong Dalawa, and a soldier and rebel in Minsan Lang Kita Iibigin.

His previous shows and movies haven't been centered on a loveteam.


But watching him in Walang Hanggan dispels any doubt that he can't exist in a loveteam. PEP.ph had the chance to see the first five episodes of ABS-CBN's newest primeting offering last January 14 at SM Megamall Cinema 6, and Coco's performance on screen is very commendable.

Playing a character much younger than his actual age, Coco possesses the magnetic appeal to make viewers go "kilig." Such is the
range of Coco's acting prowess.

Coco's character is Daniel, a young man who works in a hacienda that
is owned by someone who can be considered as his adoptive father (Joel Torre). He falls in love with a young Katerina (Julia Montes), the daughter of the hacienda owner he works for. Perhaps as a sign of respect to his boss, he chooses to hide his affection for Katerina,
even if the young woman hints that she likes him too.

It is fortunate that Coco's talent infects his co-actors. In effect, Julia Montes's performance looks inspired and believable.

Julia's decision to jump to a mature role after playing a teenager in
Mara Clara seemed to be a gamble at first, but all doubts are dispelled once she is seen holding her own against Coco Martin. Julia
still plays a young woman—one as young as 14 in an episode—but her
natural naïveté works against the mature outlook of Coco's character.

Julia plays a teenager who has a crush with a boy who doesn't seem to be interested, so she waits to reach legal age. But once all grown up, the boy still leaves her, and gives her her first heartbreak. That
plot is believable, and will surely erase doubts about a Coco-Julia
team-up.

The performance of the other members of the cast are also as terrific,
particularly Eddie Gutierrez, Susan Roces, Helen Gamboa, Dawn Zulueta, Richard Gomez, and Joel Torre. Even the actors playing short roles make great marks, especially Spanky Manikan as Dawn's dad, and Fred Payawan in a cameo.

Aside from the performances, Walang Hanggan's plot is also beautifully written. Although it seems to be familiar and dated as
seen from the previews, new twists and efforts to avoid the obvious
keep everything fresh.

Some flaws mar the material, however, like the obvious drop in the
quality of the cinematography after the premiere episode. While the
first and second episodes look like they were shot in HD, the next
episodes look less crisp and are either too bright or too dark.

The attempt to cram as many scenes in an episode also results in the
material looking rushed—dialogue in the next scene spill over to the
previous scene, and the fast-cutting also mars the beauty of the
scenes from being breathtaking.

But these flaws can easily be remedied, because the next episodes after the premiere week will finally slow down. These flaws do not also affect the strength of the story and the cast's performances, so Walang Hanggan remains as a show you should watch out for this 2012.