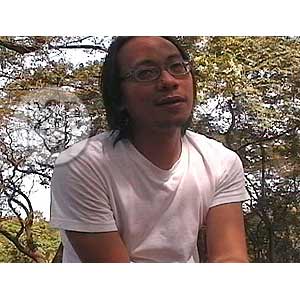 Lourd de Veyra (in photo) of Radioactive Sago Project talks about the music industry in the documentary Banda Rito, Banda Roon, an entry submitted by students from the University of the Philippines-Diliman. This short film is one of the 19 entries competing in the ABC-5 show Dokyu: Ang Bagong Mata ng Pinoy Documentaries.

The ABC-5 show Dokyu: Ang Bagong Mata ng Pinoy Documentaries will air its season finale this Friday, August 10, at 10 p.m. When the show started airing last May 18 with a new host, Patricia Evangelista, and a new format as a competition for students, it screened two short films every episode.

Winners will be determined by way of 50% text voting/ranking from the public and 50% critics' rating. These three jurors are Kara Magsanoc-Alikpala, Prof. Danilo Arao, and Ed Lingao.

Prof. Arao is an assistant professor of the Dept. of Journalism, College of Mass Communications, University of the Philippines, Diliman, Quezon City. Ed Lingao is a veteran broadcast journalist and currently ABC-5's news manager.

ABC-5 will be giving away P50,000 tax-free to the grand-prize winner while all 19 finalists and the winner of the Viewers' Choice Award get trophies as well.

ESTROPA (Finalist #1)
University of the Philippines - Diliman
Tondo gangsta rappers articulate their sentiments and their lives, and interpret their environment through their songs.

KENDI MAN (Finalist #2)
University of the Philippines - Diliman
Richard Rodriguez is a talented candy vendor who was featured in a wish-giving reality television show. His wish for a permanent job was not granted. This documentary follows his everyday life, his struggle to make a living, and his efforts to make sure that his wish will be granted.

To be a homosexual in a dominantly Catholic country is a struggle. To be a handicap in a society soaked in vanity is a burden. Imagine someone who is both gay and disabled. For him, life works in mysterious—and mischievous— ways.

Swollen Tonsils Productions stumbles on a community that is empowered through its uniquely created speech—Gay Sign Language. This benchmark documentary features the lives of three members of the Deaf Gay Community as they prove that language is not only a communication tool, it symbolizes the group's strong bonds.

NASAAN ANG KATAWAN NI BAKLESH? (Finalist #4)
University of the Philippines - Diliman
Three muscular gay men struggle to maintain a body type that is not endorsed by a macho society. Together they hold onto their identity as gay persons in spite of the odds.

FRONTLINERS (Finalist #5)
St. Scholastica's College - Manila
A video documentary on the lives of nine selected foot soldiers serving in three branches of the Armed Forces of the Philippines.

KOREANOY (Finalist #6)
University of the Philippines - Diliman
This documentary tackles the life of a foreigner—Yu Tae Yun/Danny, a Korean exchange student in UP—who hails from a country that has a big influence on Filipino pop culture.

BIYAHED DAYA/BIYAHENG LANGIT (Finalist #8)
Colegio de San Juan de Letran - Manila
This documentary gives an overview of the culture and traditions of the Sagada people. Aside from showing the famous Hanging Coffins, it also delves into the proliferation of marijuana in the area.

PUNDIDO (Finalist #9)
Polytechnic University of the Philippines - Sta. Mesa
A blind man tries to fulfill his responsibilities as a father by selling ice drop and balut, facing the occupational hazards made worse for persons with disability.

BATANG BAKAW (Finalist #10)
Polytechnic University of the Philippines - Sta. Mesa
Children who steal fish at the Navotas fish port underscore the alarming poverty in the country.

ISLA PULO (Finalist #11)
Polytechnic University of the Philippines - Sta. Mesa
In the poverty-stricken Sitio Pulo, residents to find a way to live with the meager resources around them.

GRAVEYARD SHIFT (Finalist #12)
University of Makati/College of St. Benilde
A product of the Ordinary People filmmaking workshop sponsored by Alliance Francaise de Manille, this documentary depicts one day in the life of Mang Tolits, a gravedigger at the Makati Catholic Cemetery.

HANAP PATAY, HANAP BUHAY (Finalist #13)
University of the Philippines - Diliman
A community earns its living through the dead, by producing coffins and funeral accessories and/or services. It also tackles the experiences of Brgy. San Vicente workers, how they started in the coffin industry and how they get through with everyday life. Given a light treatment, the documentary aims not only to give the industry a new perspective but also to entertain the viewers.

DEAF TECHNOLOGY COMMUNICATION/DEAFTECHCOM (Finalist #15)
De La Salle - College of St. Benilde
DeafTechCom is a video documentary about Filipino deaf heroes and Filipino female consultants serving local deaf communities for many years. It shows how technology helps the deaf communicate. By creating DeafTechCom, the benefits of both worlds can be enjoyed by the deaf, providing them much needed information and assistance.

KWENTONG PA[M]BAHAY (Finalist #16)
University of the Philippines - Los Baños
By the year 2010, the government expects its bullet-train project to be up and running. Its agenda, therefore, includes the demolition of houses beside the railroad tracks that will extend from Manila to Bicol. The demolition has already started in Pandacan, Manila, and is moving towards the provinces of Laguna, Quezon, and finally, Bicol.

In Cabuyao, Laguna, some of the railroad houses had been demolished before the year 2006 ended. The people were then relocated to another site. The residents beside the railway in Los Baños and San Pablo, Laguna, also have been receiving notices of relocation. This video hopes to further motivate the railroad urban poor to voice out their grievances and demand better relocation sites.

TSILDREN: EMPLOYED? (Finalist #17)
Holy Cross of Davao College
This documentary portrays how children contribute to the survival of their families and community. We often fail to notice what they're doing. So, this is the chance to know the story behind the innocent smiles and teary eyes.

BANDA RITO, BANDA ROON (Finalist #18)
University of the Philippines - Diliman
This is a documentary about the independent music/band scene in the Philippines. Respected people from the music industry give their points of view on this rapidly growing trend.

VEGANDA (Finalist #19)
University of the Philippines - Diliman
Inspired by Morgan Spurlock's Super Size Me, a female student tries being a vegan (vegetarian) to reduce weight and achieve her "dream look."