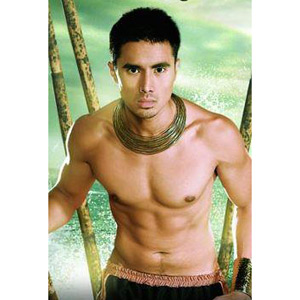 Gino dela Peña posted this update in his Twitter account (@ginodelapena): "Yup got surprised that Maey and Betong voted me off, didn't know that they were playing the game the whole time. It's okay, it's just a game."

Commercial model-turned-TV host Gino dela Peña got voted off last night and became the 4th member of the jury in Survivor Philippines Celebrity Doubles Showdown. With only 7 players left in the game, Gino got the lion's share of votes, with 4 votes aganst him. The castaway was taken off guard with what he believed was a betrayal from his current alliance.

Gino, who was originally paired with co-GMA Artist Center talent Stef Prescott, was one of the original members of the Bulan tribe and was also part of the so-called "power five"--a strong alliance among fellow Bulan members KC Montero, Arnold Aninion, John Odulio, and Mara Yokohama.

However, existing alliances changed after John was voted off. With all the uncertainties resulting from John's ouster, Gino reached out to the other castaways to form new alliances. But seemingly, this was a wrong move for this season's strategist as Gino got voted off in the last tribal council. Gino now joins Chuckie Dreyfus, Arthur Solinap, and John as the fourth member of the Jury House.

The castaways who voted against Gino were Arnold Aninion of the Philippine Volcanoes, actress Mara Lopez, and comedians Betong Sumaya and Maey Bautista. The alliance of Betong and Maey was a last-minute shift to Mara and Arnold's camp when the former promised the two comedians a spot in the final three. What further solidified the new alliance was when Mara gave an immunity bracelet to Maey before the start of the tribal council.

ODD ONES OUT. Maey and Betong knew that they had to make strategic moves if they wanted to survive and get further in the game.

Host Richard Gutierrez seemed to foreshadow the vote as he asked Maey and Betong if it was already time in the game where they needed a strong alliance to move forward. He also raised the issue of of 'palabra de honor' or one's capacity to stay true to his word.

Gino's original partner in the game, actress Stef Prescott felt also out of sorts in the tribe. When asked if she was comfortable enough to give-up her immunity necklace, the StarStruck alumna said, "I think at this point in the game, I think lahat kami pakiramdam na kailangan namin [ang immunity]. Mas kailangan ko lang talaga siya kasi pinag-iinitan ako before sa tribal council."

Stef was referring to a previous tribal council wherein it was revealed that her tribe mates thought that among the remaining castaways, she was the least deserving to be part of the final 10.

"Kayo kaya makagat ng cobra?" she jokingly added. Stef had to take a break from the game to seek medical treatment after getting bitten by a Philippine cobra. Several of her tribemates had hoped that the actress would not come back, but Stef rejoined the game just before the merger. In the end, Stef kept her immunity necklace and voted for Arnold. In her tweet last night, January 17, the actress posted this update through her account @stefprescott: My partner @ginodelapena was voted out tonight on @survivorphils4. See, from day one I NEVER betrayed you. #SurvivorPh

Despite the blindside, Gino was calm and thankful for his Survivor experience. In his farewell speech, he said that he had no regrets in playing the game. Several months after the taping of the said episode, it seems that Gino has already recovered from the blind siding incident. In his Twitter account last night, he said: "Yup got surprised that Maey and Betong voted me off, didn't know that they were playing the game the whole time. It's okay, it's just a game :)"

And amidst this week's challenges, one of the castaways breaks down while a fight ensues between two other castaways. Catch all these drama this week on Survivor Philippines Celebrity Doubles Showdown, weeknights after Legacy, on GMA-7.