Munting Heredera will end its nine-month journey by February 3 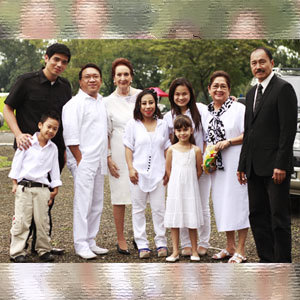 After airing for 9 months on GMA-7, Munting Heredera will have its finale week from January 30 to February 3, 2012.

"After months of dominating on primetime, GMA-7's Munting Heredera concludes its successful nine-month journey with a nerve-racking finale week from January 30 to February 3.

"Intended to run for only 13 weeks, the Kapuso family drama received several extensions after consistently topping ratings charts. The show garnered its highest audience share last August 30, 2011 with an overwhelming 49.5 points among Mega Manila households according to AGB Nielsen (based on May 9, 2011 to January 17, 2012 Mega Manila households data). To this day, Munting Heredera remains at the top of its game as it continues to register high ratings relative to its competition.

"Likewise, the show made its presence felt on the internet as netizens avidly followed and discussed the many twists and turns in the story.

"From the show's basic plot, which tells of a grandmother searching for her missing heiress, the writers of Munting Heredera headed by Agnes Gagelonia-Uligan and its award-winning director, Maryo J. delos Reyes were able to make the story even more engaging by introducing new characters and sub-stories.

"While the story focused on the search for the rightful heiress to the Montereals' riches, Munting Heredera also shed light on other issues and revelations involving other players in the story. Truly, every character made an impact and contributed to the overwhelming success of what is arguably one of GMA's most successful and unforgettable dramas.

"The three girls Mona Louise Rey, Kyle Daniel Ocampo and Barbara Miguel also impressed viewers with their talent--whether they be throwing lines at each other or acting alongside their more experienced, veteran co-stars.

"Meanwhile, with Katrina Halili, Joyce Ching and Kristoffer Martin leaving the show came the arrival of new actors including the likes of Boots Anson-Roa, Robert Arevalo, Bobby Andrews, Andrea del Rosario, Migs Cuaderno, and in a very special role, Monmon Domingo, a 12-year old boy born with cerebral palsy. Certainly, their acting performances will also leave a mark with audiences, whose nights were made more colorful by the weeknight drama.

"In its much-awaited finale week, viewers must await whether or not Manny (Roderick Paulate) will survive a new battle concerning his health, or if Desmond (Gabby Eigenmann) will remain greedy until his last breath. Witness too, how the love stories of Sandra (Camille Prats) and Jacob (Mark Anthony Fernandez), and Doña Ana (Gloria Romero) and Enrique (Robert Arevalo) will culminate in the story. Someone will also officially join the Montereal family. Who could this person be?

"Find out the answers to these and more as Munting Heredera bids its viewers farewell. Do not miss its finale week from January 30 to February 3 on its new timeslot after 24 Oras on GMA Telebabad."