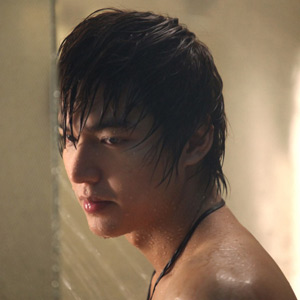 Lee Min Ho's character in City Hunter tries to fight back his feelings for a girl he has grown to love.

City Hunter rolls action, suspense, and romance into one entertaining television series. The Korean production stars Asian heartthrob Lee Min Ho as Johnny Lee (also known as Poo Chai) who is a trained and attractive assassin out to seek revenge for his father.

The first few episodes of City Hunter are riveting and crucial to the succeeding events. The narrative opens in 1983 as an attack was made on the South Korean delegates including the president while on a diplomatic trip in Myanmar. While the president was not killed, five South Korean officials plotted an underground revenge against the North Koreans. Leading this secret task force of 20 troops were Lee Jin-pyo and Park Moo-yul who also work as body guards at the Blue House. In an act of treachery to Lee and Park's team of agents, the five top officials withdrew their plan.

While the team was out in the sea to execute their mission, a sniper unbeknown to them came out to shoot down the men one by one. As a heroic and brotherly act, Park Moo-yul takes the bullets for Lee Jin-pyo who becomes the sole survivor of the incident. Lee Jin-pyo upon returning to land vows to avenge his troops, most of all, his martyr of a friend. He kidnaps Park Moo-yul's newborn son and raises him in the rural part of Thailand. Park Moo-yul trains the boy to become a skilled assassin. Poo Chai is brought up, military style, and as a kid pines for the genuine affection of parents, most of all, his mother.

The past is never revealed to him. He grows up confused and pained by the harsh rearing of the calloused and hard-hearted Lee Jin-pyo who Poo Chai comes to know as his own father.

His past his revealed to him after an attack in their village harms his foster father and kills a woman who took care of Poo Chai like a son. Poo Chai, angered by the injustice done to his mother-figure, recognizes the root of revenge. Taking advantage of this awakening, Lee Jin-pyo, while surviving his injuries, recounts the story of how Poo Chai's father was killed. This results to Poo Chai's determination to train harder not only to seek justice but as well to find his mother at the end of the mission.

He is sent by Lee Jin-pyo to study at MIT in the States and later in the series, to come back to Seoul, ready to hunt down the 5 officials who betrayed his biological father and his troops.

As Johnny Lee, the assassin, he is forbidden to let his emotions dictate on him. Otherwise, as he was he was taught, he is doomed to failure. In Seoul however, he encounters Kim Nana (Park Min Ho), a street-smart, sassy lady, who he also gets to work with at the Blue House. This brings out the romantic aspect of the series that perhaps no Koreanovela is without.

A different side to Lee Min Ho's acting is offered in City Hunter where his character depicts a son longing for his mother, an assassin out to kill, and a romantic who has to fight back his feelings for a girl he grows to love.

The series requires his emotions to be flexible. Meanwhile, as the show is replete with action scenes, Lee Min Ho's slender physique and handsome face hinders one to believe that he is an actual assassin with a troubled past. However, Lee Min Ho is noticeably within his element in his scenes with Kim Nana--the portions of the series that rouses mush and romance.

While the story may be predictable, also formulaic, City Hunter promises to be a delight to Koreanovela fanatics.