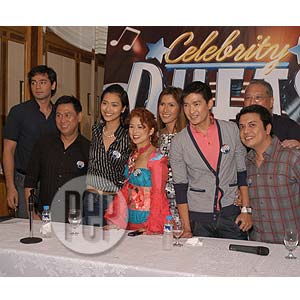 Eight celebrities from different sectors of society bravely take up the challenge of showcasing their other talent, singing. They will try their luck by performing with legendary Filipino singers in GMA-7's Celebrity Duets.

The Kapuso Network's senior vice president for entertainment Wilma Galvante narrated how they came to know about this reality song competition of Fremantle Media.

"We first thought of Celebrity Duets last year when it aired as a season breaker for American Idol. It really rated well. It was also a concept by Simon Cowell, one of the judges in American Idol. We started talking to them [Fremantle] to get the license to do the show."

She points out the difference of Celebrity Duets from other reality-based programs. "It's not your usual program or your usual singing contest. We have very important people here who are not singers. We make them singers and sing with other icons, our singers dito sa industriya natin.

"Hindi rin ito judging. There are judges, pero walang votes from the judges. It's all from the public choice ng manonood. Talagang ‘yong audience ang magsasabi kung who stays and who will go."

The viewers, through text votes will judge the performances. Helping the viewers to choose are three judges: composer and arranger Louie Ocampo, comedienne and stage performer Mitch Valdez, and a member of the APO Hiking Society Buboy Garovillo.

Unlike other typical singing contests, Celebrity Duets contestants are not only competing for the cash and special prizes for personal use, but also to win the cash prize which they will donate to their chosen charitable institution. Half of the P1 million cash prize will be given to the winner's favorite charity.

During the August 6 press conference of the new show, some of the contestants revealed the charities that they hope to help when they win the grand prize. Tim Yap hopes to help the Philippine National Red Cross, Dr. Calayan hopes to assist the GMA Kapuso Foundation, Dr. Kho, Jr. aims to help Gawad Kalinga, beauty queen Anna Theresa will choose her advocacy for children in conflict with the law, while Jessica will help cancer patients in the Philippine General Hospital. Tessa, who will give away the entire prize, aims to divide her prize among three of her favorite charities. The others have yet to choose the charitable institution that will receive half their winnings.

View photos of the Celebrity Duets contestants in the gallery.