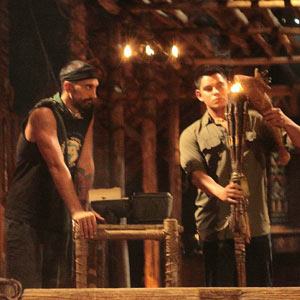 KC Montero (left) was voted off from Survivor Philippines Celebrity Doubles Showdown, making him the last member of the jury that will choose the Sole Survivor.

Mara Yokohama earned her first victory in the last immunity challenge held recently. For this reason, she was assured a spot in the Top 3 of Survivor Philippines Celebrity Doubles Showdown. Mara and the other remaining castaways KC Montero, Albert Sumaya, Stef Prescott took part in the final tribal council of the reality show.

Host Richard Gutierrez then asked the four castaways regarding the person whom they consider to be the most deserving to win the show.

He pointed out, "Albert hasn't won in any of the challenges this season. Is Albert [Betong] the least "deserving" to be part of the top four?"

KC remarked, "Just because he hasn't won any of the challenges, does not make him not deserving to be here. Yung mga challenges na yon are really hard. It has nothing to do whether you're the fastest or the tallest or the strongest. Whether you have the biggest heart, he really showed it to us in the challenge with Mara. Sometimes people win the challenges, sometimes they win by luck. I think Albert deserves to be here."

Richard asked Mara how she felt winning at the last minute.

"Who among the four of you is the person who relates very well?"

The actor-host brought up the topic of Maey Bautista being voted out last tribal council. He asked Albert if it is to his advantage that Maey is now part of the jury.

Another question that Richard asked the group was "If Maey is a perfect castaway, what could be her weakness?"

KC pointed out, "Yung weakness niya was just the fact that everybody knows everyone likes her...When she came into the merge, everyone likes Maey...It's not really a weakness but in this game, it's a weakness..."

Next question was "Is it still important which camp the jury members belong to?"

Richard then asked Mara if she thinks Arnold will vote for her and her reply was "Sa tingin, oo...Ang victory ko, magiging victory niya."

Mara asked permission from the Survivor Host if she can read her letter to jury member Arnold Aninion. Richard allowed the young lady to express her feelings for the athlete.

"Pumpkin sauce/dork, I miss you. Night time is the worse. I'm so lonely. But I think I'm getting stronger. Now, I really want to win, not just for me but for you. It's crazy how boring camp is without you. I really want you to be here. Thank you for getting me here. I'm sorry I wasn't able to protect you. No matter what happens from now, you and me, we've already won. P.S. You look handsome in full clothes but can you come in Speedo next tribal council. I really miss you. Mara."

The Survivor host's last question was "Who among the castaways do you want to be part of the Top 3?"

KC commented, "I'd be stupid to say if someone who deserves it more than me. I wanna win. We all wanna win. We would not be very smart players to be with people who can beat us."

After the talk, the castaways were asked to vote for the last time. Since Mara has the immunity necklace, she has a sure spot as part of the Top 3. In a sudden twist of fate, KC, who is considered to be a strong contender, was voted out. KC appeared astonished with the outcome. A very shocked Betong is now part of the Top 3 along with Mara and Stef.

Maey, who sits as a jury member, was visibly emotional and overjoyed by the turn of events.

Before joining the jury, KC gave this statement: "I was obviously surprised. At least it would be tied. Betong could turn in on anyone...I got duped by a bunch of little girls. Ako, Mara and Stef, we voted for Betong. Sinabi ko kay Betong, if I win, ako bahala sa yo. I'll pay him para ok siya. Stef and Mara basically gave the game to Betong. That's the dumbest move that they could have done. They should have at least, try it with me. They would have a better chance to win with me. Oo, I'm a threat. Siyempre pero sino ang mas threat, ako o Betong? Betong."

Who do you think will emerge as the Sole Survivor this season? Survivor Philippines Celebrity Doubles Showdown will conclude this Friday, February 10, on GMA-7.