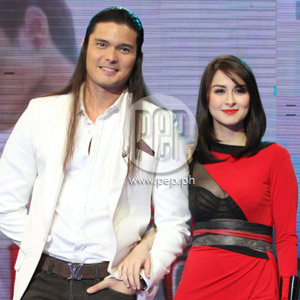 In My Beloved, Dingdong Dantes plays an angel of death who is forbidden from falling in love with a mortal (played by Marian Rivera). How can they both overcome all the obstacles preventing them from being together?

GMA-7 is all set to launch its newest original drama series, My Beloved. It will replace Survivor Philippines beginning tonight, February 13,on GMA Telebabad.

Real-life couple Dingdong Dantes and Marian Rivera underwent not just major makeovers with their looks but also in the characters they portray for this drama series.


Dingdong is cast as Benjie/Arlan, an angel of death commonly known as "sundo" who takes on a human form to save the life of his beloved woman, and Primetime Queen Marian Rivera as Sharina, the beautiful mortal who falls in love with a fallen angel.

This marks the fifth time that Dingdong and Marian have worked with each other after starring in Marimar, Dyesebel, Ang Babaeng Hinugot sa Aking Tadyang and Endless Love.

Adding star power to this high-budgeted program is the special participation of veteran actress, Ms. Nova Villa. Following her stint in the network's afternoon prime soaps, Ms. Nova lends her acting chops in her very first primetime program as she plays an offbeat role as Lola Inggay, Benjie's drunkard grandmother.

She lost her faith in God after experiencing countless misfortunes throughout her life. As Lola Inggay, she earns a living by deceiving people as a jueteng collector.

Joining Dingdong and Marian are Paolo Contis as Gimo, Benjie's childhood friend who is the leader of their gang. This latest project reunites Paolo with his long-time friend Dingdong after playing the latter's villain in Ang Babaeng Hinugot Sa Aking Tadyang.

Meanwhile, Katrina Halili joins the cast of My Beloved as Emmie, Benjie's loyal girlfriend. Katrina once again stars alongside Dingdong and Marian after playing the famed kontrabida role of Rebecca Santibañez in the high-rating telenovela, Marimar; Marky Lopez as Tikyo, Benjie's most trusted ally; and playing an equally vital role is respected dramatic actress, Ms. Chanda Romero as she breathes life to the character of Elsa, Sharina and Monica's authoritarian aunt who will make their lives a living hell.

Two other love teams are also included in this program: the tandem of Jennica Garcia as Monica, Sharina's protective sister, and Carl Guevarra as Junic, Monica's boyfriend; and the lovable pairing of Tween stars Louise delos Reyes as Grace, a poor girl who pretends to be well-off, and Alden Richards as Rico, Benjie's younger brother.

Playing the coveted role of Sharina's ardent suitor is one of GMA-7's hottest actors, Mikael Daez as Nelson.

Completing the star-studded cast are the characters known as "Sundo" who will join Arlan in his mission: Jon Hall as Joryl, Fabio Ide as Rowan, and Jay Gonzaga as Mikal.

SYNOPSIS. The story of My Beloved begins when Sharina's happy life turns upside down with the death of her father, Romeo. Left all alone with nothing and no one to care for them after her mother eloped with another man, Sharina and her younger sister Monica must now live and work under the strict rules of their aunt Elsa and her daughter Ginella.

Life has been unbearable for the two sisters, but Sharina does not give up in despair, and instead strive to get an education through the help of Lily, played by Rio Locsin in a special guest role, a kind-hearted teacher who treats Sharina like her own daughter.

Tragedy strikes Sharina's world once again when Lily passes away. Much to her surprise, Lily entrusted her small business including her house to Sharina. So, together with her sister Monica, Sharina decides to move in to Lily's house and start a new life.

One day, Sharina sees Lily's old painting of a man inside her ancestral house. She also gets hold of Lily's diary and learns of her encounter with a man who saved her from an accident. Lily fell in love with this mysterious person and waited to be reunited with him until her last breath.

Completely intrigued with the identity of the good-looking man on the canvas, Sharina could not get the face of the man out of her mind and it repeatedly haunts her dreams every night. Until she meets an accident and Sharina finally comes face to face with the mystifying being in the painting. The man saves her from death and Sharina kisses him before he disappears.

In the divine realm of angels, one strict rule applies to every "sundo": that no angel of death can fall in love with a human being. In such case, Arlan has freely chosen to give up his immortal state when he genuinely kissed Sharina back.

Don't miss the unconditional story of never-ending love with the premiere of My Beloved, starting tonight, February 13, on GMA Telebabad.