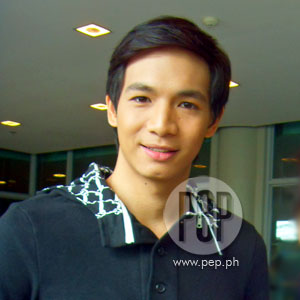 Chris Tiu is one of the hosts of TV5's newest game show, Toinks! Sino ang Tama?, which airs every Sunday at 2pm.

How good are you at 'reading people'?

Predicting whether a person on the street will give the correct or wrong answer is the key to winning on TV5's Toinks! Sino ang Tama? This game show started airing its pilot episode last Sunday, February 11, at 2PM.

Joining the fun are Gene Padilla and Pretty Trisza who will be interviewing three random people from the streets, which they call 'TaKals' short for Taong Kalye, who will be asked the same questions.

MECHANICS. In the first round, the players will have to guess which 'TaKal' got the answer correctly. There are two questions and the player whose guess is right will get 100 points for each.

In the second round, the players will now have to guess who gave a wrong answer among the three. This round is worth 300 points.

The pair with the higher number of points wins the eliminations and is guaranteed P30, 000 pesos in cash. They will also proceed to the jackpot round where they can win the pot money.

In the jackpot round, they would have to pick one TaKal and guess if that person will give a right or wrong answer. If they predicted all three correctly, they win the jackpot and if not, the amount will be added to the pot money.

The game gets hilarious as people caught off-guard on the streets give crazy answers to seemingly easy questions.

The players will have to see through the minds of the TaKals and judge whether they are likely to give a correct or wrong answer.

The viewers and players, alike, will be surprised by how some people are really not as they appear.

INFOTAINMENT.With the show featuring people on the streets and catering mostly to the masa, members of the entertainment press, inclucing PEP.ph asked host Chris Tiu, isn't he worried that the show would come off as 'bakya'?

The former Ateneo Blue Eagle team captain debuted as a TV host in 2007 on the show Pinoy Records, alongside Manny Pacquiao. How is hosting this game show different from his previous stints?

He admits that he does dance when he's out with his friends in clubs but doing it in front of the camera was something new to him.

"Tsaka game show siya so a lot of bantering, a lot of improvisation, chatting and getting to know the contestants. So, mas natural siya. Nag-enjoy ako," he added.

Just last month, Chris also launched his new show iBilib on GMA-7. He clarifies that he is not an exclusive talent of either network.

Given the choice, what other kind of shows would he like to do in the near future?

The questions on the show range from easy, tricky to difficult. Viewers will learn trivia and basic knowledge just by watching the program.

"It's more of to be able to use this platform to educate the people, the viewers and to create wholesome shows."