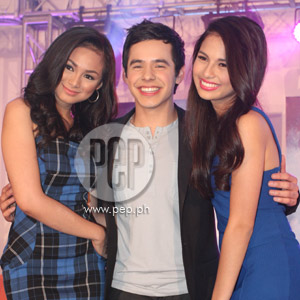 TV5's Nandito Ako is one of those rare shows that live up to its hype. It's really quite good.

Nandito Ako stars international recording artist David Archuleta in his first acting role. He plays Josh Bradley, a teen singer from the United States who was born in the Philippines.

Growing up in the United States, Josh Bradley dreams of the day he can come back to the Philippines to find his missing mother. And on the day his international tour sends him to the country, he wastes no time to look for his mom, and a lost young love.

Hype surrounded David Archuleta's decision to stay in the Philippines for more than a month to tape a local TV series. An alumnus of American Idol Season7, David is best known to be a singer, and not an actor. Thus, TV5's decision to rely on David's untested acting skills looked like tough gamble.

But the good news is TV5 played its cards right in getting David, because as it turns out, David is not just a good singer, but a good actor too.

David's inherent charm also dominates the show. The kid has a good heart, and it shows. The show has its share of serious themes, sure, but you can't help but smile whenever David is onscreen.

It also helps that David's co-actors give good performances, particularly the two lead actresses. Jasmine Curtis Smith, playing a teenage girl mired in poverty, manages to carry a strong persona, even though most of her scenes should keep her in grief. Eula Caballero, a TV5 homegrown talent, is also growing up to be a good actress herself.

But the best thing about Nandito Ako is that its story is a stroke of genius. It mirrors David's real life, taking advantage of a fan's fantasy--what if the idol is just like them? It also mixes David Archuleta with the Josh Bradley character, thereby giving the fictional character the authenticity it needs.

Right now, Nandito Ako is not making a big dent in the ratings game, and that's a shame, because it is quite good, and a must-see. David's charms and mere presence make it so.