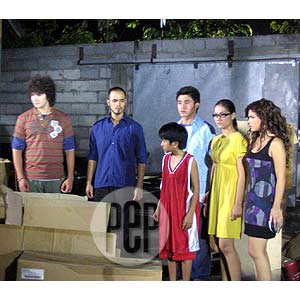 (From left, clockwise) Matt Evans, Oyo Sotto, Arron Villaflor, Maja Salvador, Denise Laurel, and Makisig Morales set aside their differences and rivalries to save the world in the second season of Pedro Penduko at ang mga Engkantao.

Going Bulilit mainstay Sharlene San Pedro joins the cast as Monique, the best friend of Makisig's character. In this fantaserye, Sharlene has the power to emit blue flames to ward off evil spirits.

Pedro Penduko (Matt) needs to combine his powers with the engkantaos Josef (Oyo), Edward (Arron), Moy (Makisig), Denise (Dianne), and Marie (Maja) so they can defeat their evil nemesis Kalagua.

Angelika dela Cruz plays the role of Dr. Eva Tabinas, a university guidance counselor, who is being controlled by Kalagua.

Co-star Denise added, "We're going to have new twists po kasi na sobrang unexpected... Each and every character has their own story and you're going to see all the characters come together. More special effects, more action, more drama, more comedy."

Pedro's new round of adventures, like the previous seasons, tries to instill values in its viewers, said director Dondon Santos.

Originally, the show was supposed to run for only one season. Another fantaserye, Lastikman, was to take its place.

"I think we have a good team surrounding us. We have a good director, we have good producers, we have a good cast—lahat kami hardworking. Everyone gives 110 percent, so sobrang it's a blessing from God na may second season kami. I feel that everybody deserves it naman," said Denise Laurel.

Matt Evans noted that September would mark the series' anniversary. The Pinoy Big Brother Teen Edition ex-housemate said that he is thankful for the projects that are being given to him. Next month, he is set to star in an episode of Love Spell, "Hairy Harry," with on-screen partner Melissa Ricks.

Follow the adventures of Pedro Penduko at ang mga Engkantao every Saturday, 7 p.m., on ABS-CBN.