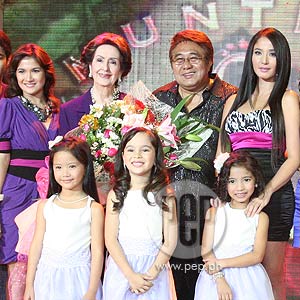 "Using an average of 5 viewers per television household, these numbers translate to around 1.1 million more viewers tuned in to GMA over ABS-CBN and almost 4 million over TV5 from all over the country.

"Leading across all dayparts in Mega Manila, GMA kept its stronghold of its bailiwick area, which now comprises more than 59 percent of total television households nationwide. The Kapuso Network registered a total day average of 41 share points, up by a notable 16.1 points from ABS-CBN's 24.9 points, and up by 26.3 points from TV5's 14.7 points.

"GMA remarkably swept 10 out of the 10 top-rating programs in Mega Manila for the entire February with the finale of Survivor Philippines Celebrity Doubles Showdown topping the chart with an overwhelming 52.2 household share points. The list also includes newly launched GMA programs namely Legacy, My Beloved, and Biritera.

"Similarly in the crucial area of Urban Luzon, where 77 percent of total television households are found, GMA remained ahead of competition in all dayparts with an audience share of 39.8 points. ABS-CBN trailed behind with 26.7 points; and TV5 with only 14.2 points.

"GMA's lead in Urban Luzon translates to about 1.9 million viewers over ABS and 3.6 million more viewers over TV5 in February.

"The Kapuso Network also dominated the list of top-rating programs in Urban Luzon occupying 8 out of the 10 slots. The Telebabad program Munting Heredera, which aired its final episode in February, culminated its 9-month run as the number one program on primetime for the said period.