Behind the scenes of "That's My Doc" 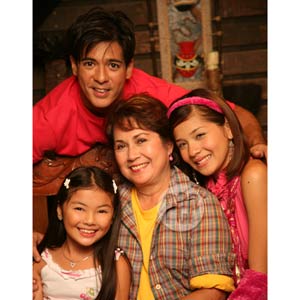 Aga Muhlach makes his comeback on TV after a year of being away from the limelight on ABS-CBN's comedy show titled That's My Doc. The 38-year old actor takes on the role of Agaton Abogado—a pediatrician who sought greener pastures in the United States as a nurse but returned to the Philippines after a pang of homesickness and a quest for the true meaning of life hit him.

"I'm just happy that I'm playing a doctor role again. I'm happy also that I'll be working with kids again," he tells PEP (Philippine Entertainment Portal) during their taping for the pilot episode of the show.

Will his show, That's My Doc, pave the way for more sitcoms?

ABS-CBN business unit head Alou Almaden explains that Aga's role as a professional who wants to give back to his family, friends, and community will be the heart of the entire sitcom.

"It is a sitcom that will not only make viewers laugh, but it will also tackle health-related concerns and issues on the side. Since Aga is playing the role of a pediatrician, viewers will be able to pick up bits of medical tips," says Almaden.

That's my Doc also signals the TV comeback of veteran comedians Nova Villa and Roderick Paulate as part of the well-meaning but peculiar personalities in Brgy. Tabuneknek.

Nova will portray the role of Tita Ocs, Aga's aunt who is the community's "Jill of All Trades." Roderick, who proved to be a hit in playing the closet gay admirer of Aga in Okidoki Dok, now takes the opposite role as Aga's nemesis in the neighborhood as Major Ret Retualo or the ex-military officer who stands as Tabuneknek's leader.

To add to the odd bunch of characters and provide more laughs to the show are Bayani Agbayani as pet shop owner Buddy. He is the unrequited love interest of Cita, played by Pokwang. They have an "adopted" pet chimp named Kokong.

That's My Doc, a sitcom that tackles community health-related issues in a fun manner, airs on ABS-CBN every Sunday right after Sharon.