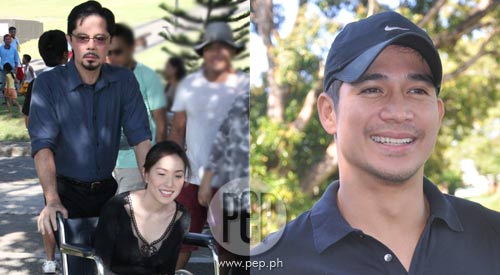 There are two central stories at work in Dahil sa Pag-ibig, ABS-CBN's newest primetime series. Both are stories of vocations born out of a test by fire.

Dahil sa Pag-ibig had a star-studded premiere last night, March 11, at TriNoma Cinema 7. PEP.ph (Philippine Entertainment Portal) had a chance to view the first five episodes with the cast members.

The first story is about Leo Valderama (Christopher de Leon), an ambitious person who dreams of liberating his old province that is mired in poverty due to its corrupt politicians.

The second story is about Alfred Valderama (Piolo Pascual), who out of his tragic past culminates a close relationship with God, which makes him seek priesthood.

The event that cements the two characters' vocations is the test of fire that they go through together. As a child, Alfred witnessed the death of both of his parents. Later on, he gets adopted by the same man who caused these deaths, Leo.

Along the way to the fulfillment of their missions, both Leo and Alfred will continue to be tested. Leo, who will eventually be elected mayor, will face death threats; Alfred becomes a priest but must forget a scandalous love affair with his adoptive sister Jasmin (Cristine Reyes).

This story is what makes Dahil sa Pag-ibig exceptional—never has there been a primetime series that has dealt closely with the concept of religious concepts like God's will, vocation, sin, and retribution, in this grand scale.

The production team's attention to detail is much appreciated. Because the story starts in the late 1980s to the 1990s, artifacts from that age are used: an old five-peso bill, a working pager, a poster of former President Fidel Ramos, and old vehicles. Unfortunately, there can be a few misses, like Cristine Reyes's character holding a copy David Nicholls's One Day in 2000. The book was released in 2009.

Shot composition is also as remarkable, with some shots clearly created to contrast with a previous one. One such frame is the death scene of Alfred's mother, which recalls Michelangelo's The Creation of Adam. Later on, a shot of Leo and Alfred mirrors that scene closely.

One factor that may affect Dahil sa Pag-ibig negatively is that Francis Mangundayao and Ella Cruz, the young actors playing the teenage versions of Piolo Pascual and Cristine Reyes, do not have the chemistry needed to convince viewers that love can bloom between them.

But this point is dwarfed by the high quality of Dahil sa Pag-ibig's production. Viewers can also look forward to the presence of Maricar Reyes in the teleserye as Agnes.

Directed by Darnel Villaflor and Avel Sunpongco, some scenes of this teleserye were shot in Rome and Vatican City. To prepare for his role as a priest, Piolo was given the chance to talk with Filipino priests who were based in Italy.