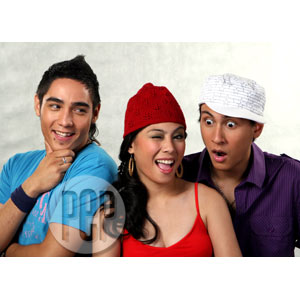 Gee-Ann Abrahan's character, Nina (center), will have to choose between her childhood friend Carlo (Mickey Perz, left) and the celebrity Dominic (Bodie Cruz) in the episode "Bumalaka Bulalakaw Boom" of Love Spell.

The love triangle of Bodie Cruz, Gee-Ann Abrahan, and Mickey Perz continues even outside the Pinoy Big Brother (PBB) house in the latest mini-series of Love Spell titled"Bumalaka Bulalakaw Boom."

The three housemates were first introduced to the public during the second season of PBB. The audience witnessed how Mickey, the housemate from Switzerland, became close to Gee-Ann. They also noted how Bodie, the son of Tirso Cruz III, confessed his true feelings for the housemate who ended up becoming the Fourth Big Placer of the said reality show.

After all of them went out of Kuya's House, it remains to be seen who between the two boys will win Gee-Ann's heart. This continues to be the situation in the latest episode of Love Spell, which will start airing this Sunday, August 19, on ABS-CBN.

In this mini-series of Love Spell, Gee-Ann (Nina) and Mickey (Carlo) play the roles of dance partners and childhood friends. They both dream of stardom but, unfortunately, Carlo was crippled in a fire accident while Nina becomes a backup dancer of a popular celebrity (Dominic) played by Bodie. For his part, Dominic wants to quit showbiz and become a surgeon but his parents won't allow him to do so.

Things are not going so well for the three when a mysterious meteor crosses Nina's path and gives her telekinetic powers. Nina is secretly in love with Carlo so she uses her power to help her best friend achieve his dream. But will this help Carlo realize that Nina is the girl for him or will Nina find another guy who will love her even without her uncanny abilities?

THE CHEMISTRY. During the press conference for the latest Love Spell series last Monday, August 13, at the 9501 restaurant in ABS-CBN compound, the press asked about the chemistry between the three characters. Director Mae Cruz candidly answered with a question of her own: "On-screen or off-screen?"

Direk Cruz explained, "On-screen kasi most of the scenes that I've done are the ones of Bodie and Gee-Ann because that's what we've done sa rehearsals nila. Parang the ones of Mickey and Gee-Ann doon sa house mostly kasi parang magkababata sila, parang silang magkapatid. That's why I can't say yet 'yung kay Mickey at kay Gee-Ann on-screen."

She added, "But si Bodie at Gee-Ann mayroon silang chemistry, you can see from the tinginan and they know right away what they'll say. They know how to look at each other, so nakakakilig."

The director also described how the actors interacted with each other during off-screen moments. "Off-screen, I see the bond of the three. I see Gee-Ann and Bodie talk on one side, then, si Mickey and Gee-Ann when they go together I feel the support with each other. Parang it's going to be very difficult to say who will she end up with."

THE NEWBIES IN ACTING. The three former housemates admitted that they were all newcomers in acting. To improve their acting skills for this mini-series, Bodie, Gee-Ann, and Mickey attended workshops so they could prepare themselves before doing Love Spell.

How did they fare in their first shooting day for Love Spell?

Direk Cruz recalled, "Acting-wise, I'm surprised kasi I've handled the past PBB Season 1 [housemates] they were very raw kasi, meaning, hindi nakapag-workshop. Of course, it was understandable siyempre kasi coming from the [Pinoy Big Brother] house, they're not really actors naman. But the three of them [Bodie, Gee-Ann, and Mickey], they did Your Song and they had workshops as well, so surprisingly it wasn't parang taking us as long as I was expecting.

"But, of course, there were some mistakes that they have to haul, meron pang little things that we have to address. Of course, they're newcomers, e, so we don't expect naman na after three workshops best actors and best actresses na sila."

She noted that her three main actors did pretty well in their shooting. And since they're just starting, Direk Cruz reminded them about the important things that they would need to be able to stay in the business.

"The attitude and the professionalism," said Direk Cruz. "When they go to the set, they're there as actors and they really listen and they really want to learn. They really want to do well and I think that what's very important. Parang it's not so hard din for me kasi I see the willingness of the three," observes the director of this month's Love Spell.

Love Spell presents"Bumalaka Bulalakaw Boom" will air for four Sundays starting August 19. This will also be the first Love Spell series that will give the viewers the chance to choose their own ending.

Through text votes, the viewers will decide who will end up with Nina (Gee-Ann)—the childhood friend Carlo (Mickey) or the popular Dominic (Bodie). Voting will start on August 19 and will end on midnight of September 8.