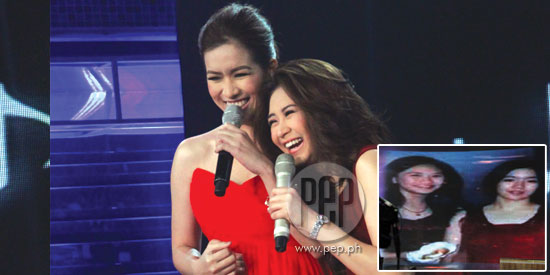 Angeline Quinto gave Sarah Geronimo a headset during the March 19 episode of Sarah G Live! The two singers competed with each other during the 2002 singing contest Star for a Night (inset) wherein Sarah emerged as the winner.

The two singing champions are constantly being pitted against each other but they both maintain that there is no rivalry between them.

Both singers have known each other for a long time and have actually competed against each other in amateur singing contests.

Angeline recalled that she started singing at age six and started joining amateur singing contests at the age of eight. “Sumali ako ng mga amateur, walong taon.” Sarah revealed that she joined contests when she was seven years old.

Why did Angeline join singing contests at a young age?

When Angeline was asked how many contests she would join in a day, “Sa isang araw, tatlo,” was her answer. Sarah, on the other hand, would participate in two competitions per day.

Does Angeline have any special “ritual” when she joins a singing competition?

Sarah revealed that instead of a rosary, her father would put coins in her shoes to drive away nervousness.