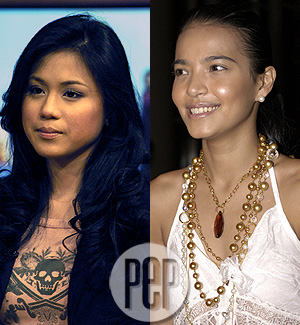 Toni Gonzaga and Alessandra de Rossi speak up on the controversial e-mail exchange.

Alessandra de Rossi and Jeremy Marquez had problems with their relationship but it won’t take long before they patch up their differences.

Their latest squabble however signaled the end of their romance. What went wrong? How was it different from their previous squabbles; what made it serious enough for both to call it quits?

The probable answer: the alleged involvement of Jeremy’s old friend—TV host and actress Toni Gonzaga—with whom he had recently exchanged e-mail messages over his problems with Alessandra.

Toni was widely believed to have a special relationship with Jeremy when both hosted a defunct segment—“Showbiz Helleur”—on GMA-7’s showbiz talk show S-Files. Though both denied any special ties, they admitted being good friends on and off the camera.

Since Toni’s transfer to ABS-CBN, their friendship stalled understandably because their careers went on different ways.

However, this friendship has since been revisited—with Jeremy allegedly confiding with Toni all his problems with Alessandra through e-mail.

Toni told the ABS-CBN talk show The Buzz on November 5 that she accepted Jeremy’s correspondences, saying she would not close the door on her friend from her GMA-7 days.

But this led to controversy, as it pictures Toni as meddling into the affairs of Alessandra and Jeremy. One of the e-mails allegedly showed Toni as telling on Alessandra, whom she said was talking to friends about her problems with Jeremy in a Quezon City restaurant.

Did the Crazy for You lead actress and Pinoy Dream Academy host play a major role in the events that led to the couple’s break-up or a victim of a crossfire that she unwittingly put herself into?

In her The Buzz interview, Toni reasserts she had no special relationship with Jeremy. "Just to clarify [things], hindi po ako nakikipag-landian sa e-mail,” Toni said.

In an interview with the same show a week prior to Toni's interview, Jeremy denies the Crazy for You actress' involvement in his break-up with his girlfriend. "Let's leave Toni out of this," says the young actor. "Whatever me and Toni had before was strictly friendship, and magkasama kami sa trabaho noon. So I think it's unfair [for her]."

Toni’s name was dragged into the controversy when Alessandra read her Internet correspondence with Jeremy.

In their e-mail messages, Toni claims she only wished for the best between the two.

"I even encouraged him to pray for the matter," explains Toni. "[I said] ‘Kung ano naman kinahihinatnan noon, I'm sure everything will be alright.' And then I ended it with ‘Just pray for it.'"

In the interview with The Buzz, Toni admitted telling Jeremy that she saw and overheard Alessandra talking to a friend in a Quezon City restaurant. According to Alessandra, this admission only confirmed her participation in the issue.

Toni was with her Crazy For You co-star Luis Manzano and an unnamed assistant at TGI Fridays along Tomas Morato in Quezon City when she saw Alessandra chatting with a friend at the upper level of the restaurant.

In her S-Files interview, Alessandra said after that meeting with friends at TGI Fridays, Jeremy sent her a text message.

Toni, however, denied she ever mentioned that Alessandra was talking against Jeremy at the time she saw her conversing with a friend in the restaurant. What she mentioned, she said, was that she only saw her speaking to someone else.

Contrary to Toni’s claim, Alessandra said the ABS-CBN host and actress did mention about “problems.”

Alessandra told Toni not to eavesdrop on conversations of other people.

As her parting shot, Alex said that she would stand by Jeremy although the two have split-up again.

But when it comes to Toni, there's no stopping Alex in teaching the actress-TV host a lesson and that is not to meddle in somebody else's personal business.