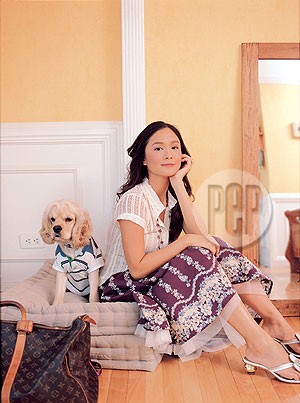 As a kid growing up in the United States, Heart Evangelista (Love Marie Ongpauco) always knew what she wanted. Though she belongs to the Ongpauco clan, owners of the famed Barrio Fiesta chain of restaurants, she was never too keen on becoming a restaurateur. What she wanted from the start was to become an artista. For her cousins, this was a cheesy ambition. But not for Heart.

It didn't take long for Heart to get her first exposure. When she was 10 years old, her family moved back to the Philippines. Her pretty chinita features made her stand out in a crowd. She was 14 when a talent scout discovered her while she was hanging out in a mall. He got her for a deodorant commercial—and set her on the way to TV-movie stardom.

What really jumpstarted Heart's career was when she decided to enroll in an acting workshop organized by ABS-CBN. She caught the eye of actress Beverly Vergel, the manager of the television network's Center for Communication Arts, ABS-CBN department that organizes workshops in the performing arts.

Heart then went to an audition without her father's knowledge. When he found out about it, he made it clear that he didn't want his daughter to get into acting. But she passed the audition. "Wala na siyang nagawa," Heart recalls.

She was soon working in a string of television shows. She started in teen-oriented programs (G-Mik; Berks) and sitcoms (The Body and the Guard; The Pilya and the Pilot), where she always played the coño but lovable girl next door.

In these shows, she was paired with John Prats, who became her boyfriend off-screen. But as most young relationships go, this one didn't last. Heart cried her heart out when she and John broke up, but she has since moved on.

Today, she is on to a new life, with Manila Genesis Entertainment and Management, Inc. setting the directions for her career, and a new love-Jericho Rosales, who was her leading man in Panday (the most recent television series she did with ABS-CBN). Indeed, Heart has moved on.