Kim and Gerald: The spunky chinita and the funny amboy 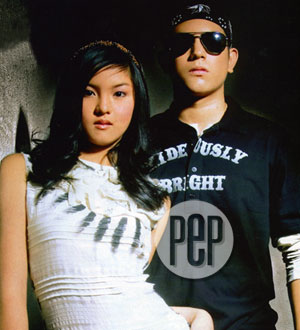 What's the real score? People get so kilig seeing the two of them, but Kim and Gerald are taking it slow when it comes to becoming more than just friends. Work, work, work is their focus. And this makes them one of the showbiz's hottest love teams and most in-demand product endorsers.

Sure, viewers saw a lot of kilig moments between the two inside the PBB house, but for Kim, those moments weren't kilig at all.

Gerald himself is cool about those supposedly sweet moments.

Asked if he felt anything special whenever he was around Kim, he says, "Ayos lang po."

At this point, the two are more concerned about work. That's especially true of Kim, who's gung-ho about her career."Work muna," she stresses. "Minsan lang ‘to ,e. Marami pa namang lalake. Kung makakapaghintay siya, maghintay siya."

According to Jun, Gerald often talks to him about girls but rarely talks about Kim.

So is it possible for the friendship to develop into something more serious? Says Gerald: "Maybe. Pero now it's too early pa po."

"Now I'm enjoying everything, every moment. I'm enjoying this interview," former PBB Teen Edition housemate Gerald Anderson tells YES! "Months ago, I wouldn't have thought that I would have an interview like this."

Back then, Gerald was more preoccupied with playing basketball for his high school, Holy Trinity. But Jun felt that he was meant for bigger things. He persuaded Gerald to become a member of the Fab Boys.

Now, after his Fab Boys and PBB stint, Gerald's easygoing nature has helped him cope with the demands of work. On the day of his YES! Shoot, he has just come from a taping that extended till morning. He has yet to sleep a wink, but he tries hard not to show it as he tells us about his long day: "They made me cry around five a.m. kanina. I went home around six-thirty or seven, and I had to be here, like, eleven-thirty."

Then he quickly points out: "Pero I'm still having fun."

PBB Teen Edition winner Kim Chiu is enjoying her newfound stardom. Her life has made a 180-degree turn, thanks to her six-week stay inside Kuya's house. The 16-year-old teleserye fan from Cebu now has her own multitude of screaming supporters.