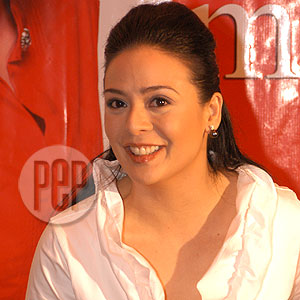 Dawn Zulueta is one of the stars of 'Desperadas' along with Gretchen Barretto, Ruffa Gutierrez and Pops Fernandez.

It has been months since news came out that Mother Lily Monteverde's Regal Entertainment would produce a movie starring (in alphabetical order) Gretchen Barretto, Pops Fernandez, Ruffa Gutierrez, and Dawn Zulueta.

The movie, to be directed by Eric Quizon, already had a working title, Desperadas, and was to be loosely based on the hit American TV series Desperate Housewives.

Until now, the movie has yet to start shooting. But if Desperadas will be made, the cast may no longer be its original line-up.

Two of the intended stars of the movie, Gretchen and Dawn, are currently involved in a feud that started during a photo shoot and extended to a commercial shoot.

Now the future of Desperadas hangs in the balance.

Gretchen already expressed her intention to back out from the project while Dawn is also having second thoughts.

"I'm not sure [if I'll still do it]. Parang for next year, I want to do other things e. So I don't know, baka hindi ko na magagawa," says Dawn in an interview with PEP (Philippine Entertainment Portal) during the press launch of meg-a clothing line the actress endorsed yesterday, December 6, at Little Asia restaurant on Tomas Morato, Quezon City.

The multi-awarded actress adds, "I'm thinking about going back to TV, spending more time with my son. I might be traveling also quite a lot next year."

Dawn also claims there are still problems with the movie production itself, and is not sure if it's even pushing through.

"From what I recall a month ago, parang we could not decide a date to start filming. Ang labo-labo e," she says.

"There's still so many details that need ironing and I haven't received any answer regarding that. So I don't know. I treat it like, parang, if it happens then it happens. I am not holding my breath. Kung hindi siya mangyari, okay lang. I'm already making plans to do other things."

When asked if her lessened enthusiasm has anything to do with her feud with Gretchen, Dawn replies: "No. It's really just talagang sarili ko lang, schedule ko lang. Nagbabago rin ‘yung priorities ko. My son [Jacobo] kasi is growing up na."

If there's something that Dawn really likes to do, she says that would be getting involved with digital filmmaking.

"I want to look into digital filming," she says. "I'm just waiting for the right script and project. But I really like to do something like that. Parang ito na 'yung bago ngayon."

She explains that she has been away from the film industry for years now: "Kasi I disappeared for a long time. Parang nakita ko, nag-evolve na ang filmmaking industry and they're beginning to tap new kinds of scripts. I'd like to take a piece of that. Naghahanap lang talaga ako ng gusto kong gawin. I'm looking into producing, co-producing."

She adds: "It's a contribution na lang kasi mahal ko ‘yung industriya. I've reached a point in my career na I can look back and be proud already of what I've done. It's just my way also of bringing back. If I can just contribute even a little more, since the movie industry is starting to die. That's the least I could do, ‘di ba, to try to help save it."