Squatterpunk to have world premiere in Rotterdam 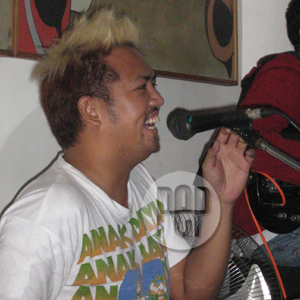 Khavn (pronounced "ka-vin") is the director of indie film about Tondo's urban poor.

Squatterpunk has no narrative to speak of---only stark black-and-white scenes of indigent children playing in the slums of Isla Puting Bato, Tondo. It will be shown in exhibition at the 36th Rotterdam International Film Festival to be held from January 24 to February 4 next year.

During the screening of his maverick film at Mag:net Café in Katipunan last night, December 6, Khavn told PEP (Philippine Entertainment Portal), "Squatterpunk is my 16th full-length film. I've made more than 50 short films."

For winning in Cinemanila 2006, the digital filmmaker received a grant from Cinema Concepts worth P400,000 services and equipment. According to Khavn, he will be using this grant to produce his main film next year, Mondomanila.

Three decades ago, the late King of Philippine Movies Fernando Poe Jr. shot his movie Isla Puting Bato, in the same location where Squatterpunk was shot.

Khavn reveals that he shot the digital film without the aid of a script. "Naniniwala din ako sa script but there are some movies na hindi kailangan ang script and there are some na kailangan."

The movie is one of a three-part movie series dubbed as Khavn's "Black Silence Trilogy." Aside from Squatterpunk, there is Ultimo, which was shot in Spain and based on Jose Rizal's last poem Mi Ultimo Adios; and The Longest Moment You're Not Here, a love story.

Squatterpunk was shown last night, December 6, to a jampacked crowd at the second floor of Mag:net Café. The audience was treated to a live performance of the band Khavn's rock band, The Brockas, which also provided the musical scoring of the award-winning film.

There is another screening of Squatterpunk scheduled on December 20 at Mag:net Café in Katipunan.