Korina Sanchez: In search of serenity 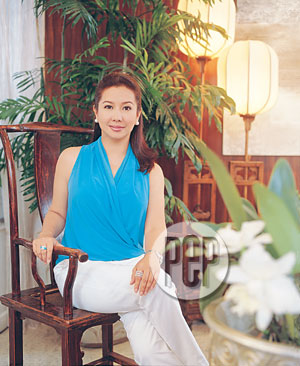 Korina, seated in her living room, talks about her Sunday afternoon show, Rated K: Handa Ka Na Ba?. "Although it's so difficult to produce, I'm really proud of Rated K because it's something na ginagaya na naman ng marami. So blood, sweat, and tears ang Rated K, but it's really all my own. So I'm really proud of that."

Despite a career in broadcast journalism spanning 22 years, television personality Korina Sanchez remains a mystery. She says she's actually a very private person, and calls herself a homebody.

"I really am, I really am!" she insists. "That's hard to believe, considering what I do, as my job. But even when I go abroad, I go first to the home stores. I love home magazines. I love places where you find accessories, paintings. I really like interior decoration."

Five years ago, the Rated K: Handa Na Ba Kayo? host went looking for a new place in Makati. "I thought that this was the best for me," she says of the house she finally found. "Parang it called out to me. The partitions made sense. It's a good size. It worked well for me."

Korina furnished the house herself, with the help of interior decorator Tito Villanueva.

"Much of the stuff is a collaboration between me and him," she discloses. "I put in many things that I've collected all through the years I was working. I love furniture, I love good pieces of wood. So I really saved up from my earnings. If you see my house, you'll know where my earnings went."

Her current special friendship with Mar Roxas, former trade and industry secretary and now senator, could cause a change of address. But for now, that's not something over which Korina is losing sleep. What she finds hard to explain is people's fascination with their relationship.

"I don't know why. Maybe because for so long I've never been linked to anybody. Because I keep my relationship very private, and because of my job being a news presenter, there was a lot of mystery about what I'm really all about. If I even have a heart, 'di ba? Because you have to be really stiff and cold when you deliver the news. Only when I did Morning Girls with Kris and Korina did people probably realize, ‘A, tao rin pala siya!'

"And also when Mar became prominent because of all the campaigning. So people never really knew what he was all about, too. They just know him to be Mar Roxas, the congressman or secretary.

"So when these two people got together... Nagugulat nga ako, it's like people react to us like they were reacting to Bea Alonzo and to Piolo Pascual. But I'm not that young. I'm pushing forty, he's pushing fifty, can you imagine that!"

At press time, the two keep mum on the real status of their relationship.

In this interview which took place in 2005, Korina reveals something more personal: "I want to have a child. That I think I should have soon. Whether marriage comes with that or not, I don't know, but a child, yes. I think I want to have that really soon."