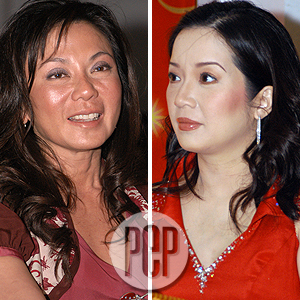 Dr. Vicky Belo neither confirmed nor denied that Kris Aquino had resigned as an endorser of the Belo Medical Group. She dismissed it by saying, "Napakababaw naman niyan."

For several days now, the talk of the town has been the alleged affair of James Yap, husband of Kris Aquino, and Hope Centeno, a former nurse-receptionist for the Tomas Morato branch of the Belo Medical Group (BMG). Earlier today, March 1, Dr. Vicky Belo addressed the controversies involving her former employee and her top endorser Kris Aquino and her husband.

Magandang Umaga, Pilipinas host Ogie Diaz asked the known beauty consultant-dermatologist to react to reports that Kris had resigned as an endorser of BMG. Dr. Belo, however, sidestepped the question by saying that the more important issue to be addressed is the well being of Kris and her unborn child because she has been hospitalized twice already—on February 22 and February 28.

The founder and medical director of the BMG dismissed the resignation issue by saying, "Napakababaw naman niyan."

Dr. Belo also recounted what happened during an episode of The Buzz, which Kris co-hosts. "What happened on The Buzz is that James told Kris, ‘I have to tell you something.' Umupo sila sa isang tabi and James saw that Kris was crying. He was trying to console her and he kept on saying ‘I'm sorry.' He said that nothing happened [between him and Hope] and Kris believes him. Although Kris believes him, for her it's like, ‘Pinahiya mo ako.'"

The "doctor of the stars" narrated that she gave a gift to Kris for her birthday last February 14, but the TV host-actress refused to accept it. To compensate, she just gave her a birthday message, "I pray that for the next two months, kasi manganganak na si Kris, sana mag-rest ka na lang, pumikit ka na lang. ‘Wag ka na lang makinig sa ibang tao para maging healthy yung baby mo. Kasi lahat ng emotions mo pumupunta sa baby. Try to be happy all the time. I really hope that one day, we will have the chance to sit down and really talk."

REPUTATION WRECKER? In the midst of these controversies, the morning talk show host Ogie asked Dr. Belo if she thinks someone is actively trying to wreck the reputation of her dermatological clinic. "Actually, naniniwala ako, kasi if you look at the situation, sino ba nagge-gain dito? Si Kris and James, hindi. Wala silang na-gain. Si Hope ba naging mas popular? Hindi rin, masama rin ito for her. For Belo, it's very bad."

"There's only one person who will gain and that's a person we know well, and has been trying to destroy Belo for the last four months, five months na yata, so siya lang naman ang may something to gain with this."

According to her, it no longer necessary to divulge the name of the person because "lalabas na rin po yun if ever, in time."

They then flashed onscreen the MMS picture of James and Hope that was taken at the controversial Timog branch. "Nandiyan yung picture na gustong papalitan ni Hope ang background kasi ayaw niyang makita na Belo ang background. Gusto niyang mag-pretend it's somewhere else. And we have to ask why does she want to do that?"

The Belo Medical group, through Atty. Raymond Fortun, issued their statement last February 24. He said that "these rumors are from the dirty handy work of third parties or disgruntled former Belo Medical Group employee [Hope]."