Kuh Ledesma: Underneath the stars 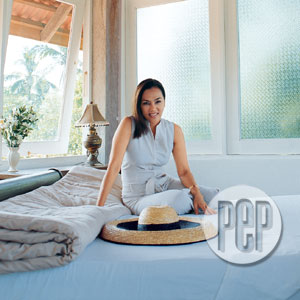 This room—located in another villa, within walking distance from the main house—really lets the breeze in, with its high ceiling and with windows on both sides. "This is my favorite room, kasi mahangin," Kuh says. She and daughter Isabella have named this the Flower Room, because of the various flower patterns found in it.

That's pop diva Kuh Ledesma proudly talking about Hacienda Isabella, her four-hectare piece of property in barrio Carasuchi, Cavite, just a little off Tagaytay. The place, long undeveloped, was recently turned into a lodge for those who'd like to get away from the hustle and bustle of the metro.

The improvements on the property didn't happen overnight. "I was gonna sell this already, about a year and a half ago," Kuh recalls. "Because nobody comes naman, parang nakatiwangwang lang, sayang." She confesses that, after buying the property almost a decade ago, she and her family didn't really do much to it: "We started building a house, then we left it for a while, unfinished. Kasi parang tinamad kami."

It was after she became a member of Christ's Commission Fellowship, seven years ago, that Kuh realized the potential of Hacienda Isabella.

"When I became a Christian, I realized everything that I have really belongs to the Lord. So, sabi ko, ‘How do I serve God with the things that I have?' I realized that in the Christian churches they do a lot of retreats... So it would be a great idea to have a place to go to, but at the same time be able to share it with people."

Being Kuh Ledesma has its advantages when it comes to promoting her business. Instead of advertising in the usual way, she decided to hold a concert at the Hacienda Isabella in 2004. She and her only daughter, Isabella, after whom the lodge is named, performed in the courtyard, underneath the stars.

At the time this house feature was published, Kuh also celebrated her 25th year in the entertainment industry. Despite her demanding schedule, Kuh tries to visit her Cavite estate regularly.

"I come at least once a week. God willing, sana in another two years we'd be able to complete this project... I'm hoping that I can really leave this to my daughter as a legacy and as something that she can continue for our ministry. It's really a ministry for us."