Ruffa denies snubbing Dawn at the YES! and PEP party 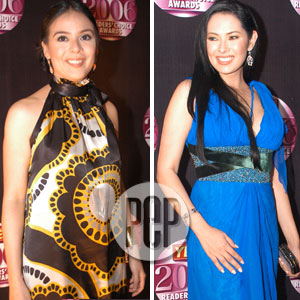 Ruffa Gutierrez (right) and Dawn Zulueta both attended the YES! 7th anniversary party and PEP's grand launch last February 28 at the NBC Tent, The Fort. Ruffa, who was with Gretchen Barretto that night, denied reports that she snubbed Dawn. "It came out nga daw na parang Gretchen [Barretto] and I were like mean girls and pinagtulungan namin si Dawn, which is not true! Ba't ko naman siya pagtutulungan?" says Ruffa.

Ruffa clears the air, "I didn't watch the [showbiz talk] shows last weekend, so I didn't know what came out. I was busy working. It came out nga daw na parang Gretchen [Barretto] and I were like mean girls and pinagtulungan namin si Dawn, which is not true! Ba't ko naman siya pagtutulungan?"

Gretchen is a known close friend of Ruffa, and a known non-friend of Dawn.

IN THE MIDDLE. Gretchen and Dawn had a spat after the two, along with Ruffa and Angel Aquino, had a photo shoot for Preview magazine's December cover and a shoot for a shampoo commercial.

The feud was sparked by blind items that clearly pointed to Gretchen as the "prima donna" among the four. Gretchen blamed Dawn for the leaks to the press.

Several reporters turned to Ruffa for the real story behind the controversy, but she kept silent. Ruffa remained neutral and would always say that both, Gretchen and Dawn, are her friends.

At the YES! and PEP party, Gretchen and Dawn allegedly snubbed each other.

Again, Ruffa is left in the middle.

"If you see Dawn's interviews, you'll always see na ‘[Si] Ruffa I consider a friend.' When that whole issue came out, I could've said all the things that I knew about their fight, but I kept my mouth shut kasi it's not my fight. It's not my battle. I have my own problems..." asserts the Philippine's Next Top Model host.

Ruffa explains what happened during the party.

She recounts, "In the beginning kasi hindi ko siya nakita when I walked in. Parang she was there, but I didn't see her.

"We were talagang in separate tables, but after I received my BRAVO! Award, siyempre tinuloy-tuloy ko na ‘yong pagka-kawanggawa ko. Tumuloy ako kay Dawn. I went to her table. I kissed Dawn, nagkuwentuhan kami, and you know, parang walang nangyari talaga."

(YES! editor-in-chief Jo-Ann Maglipon describes the award: "The BRAVO award is named after a section in YES! magazine that features the good work that stars do—not for anything they stand to gain from, not for more fame, not for more money—but for others. The award is thus given to the star who, those of us in YES! believe, most consistently and outstandingly performed acts of selflessness and generosity for the year.")

Ruffa continues, "I said [to Dawn] ‘Hi! How are you?' And then after the event, I texted Dawn pa. I said, ‘You're looking nice. Pumayat ka na. I'm so happy that we were able to talk after everything that happened.'

"And then nag-text back siya sa akin. Ang sabi niya, ‘You know Ruffa, we're cool. We don't have a problem.' Sabi niya, ‘You're looking gorgeous as ever. I hope when the time comes, we'll be able to reconnect and hang out together again.' Parang ganoon, she said something like that.

"And then, 'ayun tinext ko siya. Sabi ko, ‘Happy birthday! Baka we can even organize the next celebrity bazaar together.' Kasi for my first celebrity bazaar, she really helped me. Talagang tumulong siya and, you know, she donated her time and her effort.