Sharon and KC in Paris and Bangkok 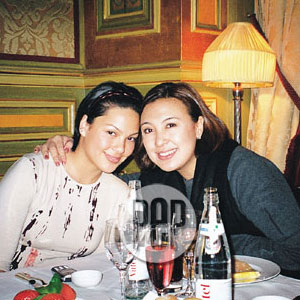 "Dinner with my baby." They had dinner in Costes, a restaurant near their hotel. "Everyone makes a ceremony out of dining, out of a meal, so kahit kape lang 'yan o ano. Hindi sila fast food masyado. French sila, e. We just wanted to take that in 'coz we couldn't do these things in Manila or anywhere else. Mag-sidewalk café, puro pollution, hindi ba? Doon uso, doon nanggaling. So parang we just wanted to experience all those things that we can't

The Megastar Sharon Cuneta and her daughter KC Concepcion shared some of their precious photos during their trip to France and Bangkok. Published in the June 2002 issue of YES! magazine, this happened before KC headed to France to study.

Read about the travel tales of the famous mom and daughter tandem.

Trip to France (March 22, 2002). Showbiz royalty KC Concepcion loved Paris so much that she hopes to visit it again soon. "I enjoyed it a lot!" she says. "It was everything that I expected it to be... I wanna go back to absorb their culture." Did her four-year study of the French language help? She says meekly, "Enough to get by."

Her mother Sharon Cuneta says that years back KC had already wanted to visit France but she had told KC: "I'll take you when you're old enough to appreciate it." Sharon explains, "Because when I went I was 10, and I only realized it was such a big deal pala to me when I'm older na."

And Sharon answered: "Because I'm taking you to France like I promised."

Sharon recalls, "When I told her, she was so happy, and I think she even doubted if it was actually gonna push through."

Sharon gave advanced notice to Viva Films where she was filming Magkapatid and to ABS-CBN where she hosts "Sharon" every Sunday.

Finally, on March 22, mother and daughter left for their five-day Paris trip. Sharon says: "She'll only be young once so I really want to spend time with her bago siya maging full-fledged na adult."

And KC? She gave Mama a card saying "Thank you."

"Kami," says Sharon, " we're so mababaw. Actually, we just breathe in and take in all that's happening around us. There wasn't much to buy because it was really cold and, you know, she does stuff for Human... that she passes on to Mama, and some, Mama is still waiting to fit into. And you know, I have so many clothes in my movies. There's no need for us to really go out and buy clothes like crazy."

"This was one of the most special trips I've ever made," muses Sharon. "One, because I get to spend time with KC again. You know, things in the Philippines have a way of pulling you apart especially when one is 17 and you are a working mom."

It was all the more meaningful for Sharon because, after her father Pablo passed away, her family was complete for the first time—and on a trip abroad!

Says Sharon, "We had to choose a place, nagkataon by God's grace Kiko and I loved it, na we wanted Mommy and Kuya to see and also that it had no memories of Dad... We wanted a place with new memories... So that trip was super-duper meaningful to all of us especially me... It was the happiest vacation of my life!"