Dawn on Gretchen: "I'm not closing my doors." 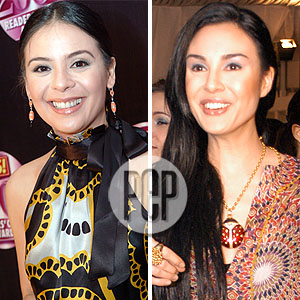 "Only time lang naman can really do that, 'di ba? It cannot be rushed. You know me, I can never do anything half-hearted. I really have to be able to feel it from the bottom of my heart. Ayokong pilitin kasi ‘yon yung hinihintay ng tao na gawin ko, 'di ba? I think everyone has to understand that, and lahat tayo nakaka-relate diyan," says Dawn Zulueta about patching things up with former friend Gretchen.

Dawn continued, "Inaabangan nila, ‘Ano mangyayari? Mag-iisnaban ba o magpapansinan?' 'Pag nagpansinan, pag-uusapan. 'Pag nag-isnaban, pag-uusapan pa rin. I think those things, it will come in due time. I just really would like it to come in the most natural way, 'di ba?

"I'm not closing my doors, kaya lang, there is the right time and venue for it. And I don't like naman to do things in front of the whole media to watch and to see. And I feel it's more genuine if it's done in private. Whatever! I'm not saying it will happen in private. Malay natin, it will happen in another occasion na magkabatian kami. We'll see na lang how it goes."

HISTORY. Gretchen and Dawn had a spat after the two, along with Ruffa Gutierrez and Angel Aquino, had a photo shoot for Preview magazine's December cover and a shoot for a shampoo commercial.

The feud was sparked by blind items that clearly pointed to Gretchen as the "prima donna" among the four. Gretchen blamed Dawn for the leaks of these negative press.

Much has been said about the issue, not just from Gretchen and Dawn, but also from talks within the four corners of show business.

STILL OPEN. Dawn said she is still open to reviving her friendship with Gretchen.

"Habang may buhay, there's always time to accept one another, to forgive one another. It's really a matter of putting it out, of letting it out. I think in this issue, marami nang nakisawsaw, so it's gotten worse," said Dawn in an interview with PEP at the Johnson's Baby Milk Bath and Lotion "Kaming Bahala sa Alaga" promo launch yesterday, March 13.

Last Sunday, March 11, Gretchen said on The Buzz that the issue between her and Dawn is over.

PEP asked Dawn for her reaction to Gretchen's statement.

Dawn replied, "Well, tapos na rin talaga kung tapos...Kaya lang hindi naman, kasi just because tapos na, magbabatian na lang tayo whenever. There are things that need to be discussed and pressed out. There were many things said, and a lot of it came from her and her side. So ako, marami pang tanong. ‘Yon yung kailangan kong ma-satisfy sa mga questions in my mind."