Dawn Zulueta ready to campaign for her husband 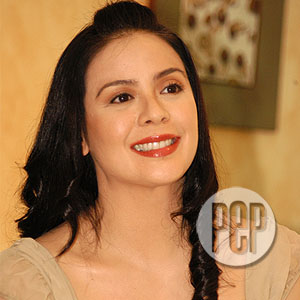 Dawn Zulueta is taking a hiatus from showbiz to campaign for her husband, Anton Lagdameo. She says she will be back at work as soon as elections are done. "I'm currently looking at mga scripts, certain materials, kasi gusto ko mag-produce. I would like to do an indie film. Something that I would star in, if not be a producer in. I want to start doing that maybe after the election," she says.

Now, Dawn is adding another role to her list of responsibilities. Within less than a month, she will start campaigning for her husband Anton Lagdameo, who is running for congressman in Davao del Norte. Anton is running under LAKAS-CMD, the political party of outgoing Representative Tonyboy Floirendo, Anton's uncle.

She explains that the road to Anton's candidacy was something they thought of hard.

"In the last couple of months, seriously na talaga namin kinonsider. Anton also thought about it and we discussed it. We decided that if this is something that he is to venture in, I will venture in it with him. We just wanted to make sure that a decision like this, to run, ‘yong sabay kami, talagang magkasama kami."

Is she ready to be a politician's wife?

In preparation for the campaign period, Dawn is finishing up her projects.

"Right now, I'm here in Manila. I'm trying to accomplish as much of my contractual commitments as I can kasi naka-block off na ako beginning April 1 to May 14. I will be campaigning na and all of that, so trabaho muna ako ngayon," she tells us.

Dawn is not shy to say that she will be asking help from friends from showbiz.

"These are good friends of ours. Good friends of Anton, not just mine... It will be fun. 'Andoon lang naman kami sa Davao del Norte, so hindi naman kami kasing laki gaya ng pangangampanya ng mga senatorial bids," she remarks.

There are a number of showbiz folk running for office this coming election. Dawn discloses that she will be supporting a few.

She was asked candidly if her ex-boyfriend, senatorial candidate Richard Gomez, has her vote.

Continue reading below ↓
"Siyempre, he has my vote of friendship. For the name of friendship, yes, he has my vote," Dawn answers.
Read Next
Read More Stories About
Dawn Zulueta, Anton Lagdameo, Richard Gomez
Post a Comment
Featured
Latest Stories
Trending in Summit Media Network