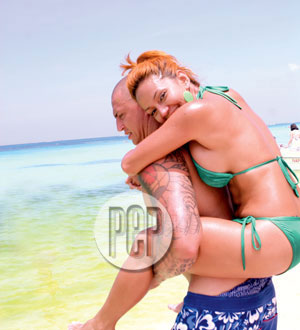 Ethel Booba and Alex Crisano were the scene-stealers in last year's celebrity sightings in Boracay during Holy Week. Remember the "bloody" Easter Sunday they had at the police station?

The summer season is here! Once again, it's time to wear those fashionable bikinis and board shorts, while getting tan under the sun.

Usually, it's during Holy Week when local celebrities unwind and take a break from their hectic schedules in showbiz. They party in different beach bars and seemingly turn "Biyernes Santo" into "Mardi Gras."


Paparazzi and showbiz writers make sure they capture all of the fun, the break, the summer love and PDAs (public display of affection).

Summer romance. What could be more fun than spending a sun shiny day with your partner? Several celebrity couples were spotted looking so sweet together, but turned bitter after summer.

Alessandra de Rossi and Jeremy Marquez. In the Celebrity Challege of Nivea last year in Bohol, Alex and Jeremy were tagged as inseparable couples by some showbiz insiders. Alessandra even let out a loud scream when she found out that she and Jeremy were not on the same barge.

However, in the last quarter of 2006, it erupted on the news that Alex and Jeremy broke up...for the second time. The rumored reason, according to an article in PEP , was an exchange of emails that happened between Jeremy and Toni Gonzaga. It was Alessandra who initiated the break-up.

Jaycee and Danilo, at that time, were celebrating their second year as a couple. There were even rumors that Danilo already gave Jaycee an engagement ring, and that the couple had plans of getting married.

Gwen Garci and Andrew Wolfe. "Andrew Wolfe and Viva Hot Babe Gwen Garci acted like love-struck teens in Bora," that was how YES! magazine described the couple in its "Boracay Blast" article in the June 2006 issue.

They were really sweet, but Gwen admitted to the photographer of YES! that Andrew was already seeing another woman. The photographer relayed, "May ibang girl daw si Andrew, pero panay din dikit niya kay Gwen."

Early this month, Andrew just came back from the England. In a PEP article , He said he was so affected by all the intrigues from showbiz that he decided to lie-low. The actor also added he is more focused on continuing his studies right now.

Gwen, on the other hand, recently returned from her Brazil trip with Brazilian boyfriend. But last Saturday, March 24, the sexy actress declared that she's single once again.

Ai-Ai delas Alas and non-showbiz guy. The comedienne was described as one hot momma by a photographer who spotted her in Boracay with her then boyfriend Wilfredo Hinahon, Jr.

There were kissing and cuddling while swimming on the pool. Ai-Ai was so in love then with Wilfredo. There were even rumors that the two were planning to get married at the Archbishop's Palace in Madaluyong on April 25, 2006. However, it was canceled and moved to November. She explained in an interview with The Buzz, "Dapat kasal na ko. Hindi natuloy kasi nalaman ng press."

The wedding never materialized. They broke up.

Ethel Booba and Alex Crisano. First, they were seen "frolicking and acting oh-so-sweet" in Boracay, when a few months before, it was reported that they're no longer together.

It could be remembered, before that Boracay sighting, Ethel accused Alex of being a drug addict. Alex, on the other hand, indirectly said that he would never go out again with a girl who speaks bad English.

People who witnessed the scene in Boracay thought that the two had reconciled. But they were wrong, at around 4:00 am, April 16, 2006, the two were seen by the reporters in a police station.

It was a "bloody" Easter Sunday, according to an article in Hi!, because Alex's head was bleeding. The former cager said to the police, "I did this to myself." The cause of the fight: Ethel reportedly got jealous when she saw Alex flirting with an unidentified woman.

Ethel and Alex patched things up. When the couple returned to Manila, they were once again coosome twosome. And as of today, they are still together. If not for the cager's pending cases here in the Philippines, the two would have gotten married abroad.

Truly, summer is always a hot season for hot celebrity couples. And this year, PEP will find a way to catch 'em.