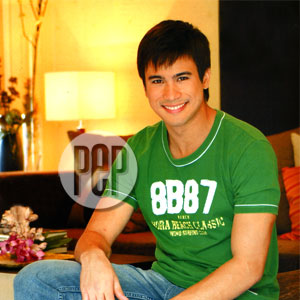 Sam Milby, who's turning 25 on May 23, can't believe that he's been in showbiz for almost two years. "Time's been going by too fast. Sobra! I feel like I'm 30 now. I'm still very makulit, but I feel like I've grown up a lot 'cause of the workload and everything."

Anyone who gets to meet Sam Milby soon realizes that: one, the guy is really thatgood-looking; two, and more importantly, he is as nice and unassuming as he actually appears on television. For that, the 25-year-old heartthrob certainly deserves the windfall that comes with fame—product endorsements, movies, television shows, concert tours, a solo album.

The biggest windfall, of course, is having his own place: a 119-square-meter, four-bedroom house in Pasig City. Sam chose a house over a condominium, following the advice of one of his managers, Eric Raymundo. Sam explains, "In a house, you have a little more privacy. Siyempre, there are no other people living in the same building. And you know, it's just a lot cheaper than if you had a condo this size, which would be extremely expensive."

The house is in the same subdivision where his manager lives, so Sam has long been familiar with the area. "I think it was the house's bedroom and the walk-in closet that got me," he says. "I needed the closet space. And the bedroom looked comfortable."

Sam—who used to rent a one-bedroom condominium at the Renaissance Center, in another part of Pasig—is rightly proud of his place, and he wishes that his parents, Lloyd and Elsie, based in the U.S., could see it. But, says the boy who is all alone in the Philippines, "They're happy that I have a place to stay."

Here's the latest about Sam's home—last April 4, a day before he left for his U.S. tour with Piolo Pascual, he sold it. The singer-actor bought a bigger lot in the same area. But while he makes plans for the new house, he will stay in a rented condo in a yet undisclosed place. That's where he will land when he gets back from his "Heartthrob" concert tour in the U.S. with Piolo Pascual.