Gretchen and Claudine have finally reconciled! 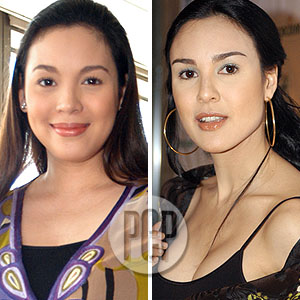 They reportedly avoided each other. The elder sister refused to comment about their rift. The younger sister talked about it, but was vague. Then one day, Gretchen (right) and Claudine finally bumped into each other—and the chance meeting put an end to their almost-three-year-old misunderstanding!

Since the news about the feud of the Barretto sisters erupted in June 2004, their reconciliation has been on a wait-and-see mode. The gap reportedly started when Gretchen and Dennis Padilla, her sister Marjorie's husband, had a heated argument about the hiring of Willie Revillame as host of Puso o Pera, a defunct noontime show of ABC 5—which is owned by Tonyboy Cojuangco, Gretchen's partner.

Dennis Padilla used to be Willie's co-host in ABS-CBN's defunct noontime show Masayang Tanghali Bayan. Willie's penchant for risque jokes and language got the show into trouble, until it was eventually cancelled. Since then, Dennis was said to have blamed Willie for his lack of work.

This was followed by media interviews where Claudine spoke in defense of Dennis and Marjorie and against Gretchen, and where Inday Barretto, the matriarch, spoke harshly against Gretchen on television. An incensed Tonyboy, coming to Gretchen's defense, had his lawyers draw up the papers evicting Marjorie and family from the Loyola Grand Villas house which Gretchen owned but which the latter had given to Marjorie to use.

Reconciliation–False Alarm? It was August 2005 when Claudine first hinted that she and Gretchen were fine, that they had ironed out their differences over the phone one day in January 2005, and that she had invited Gretchen to her wedding.

The youngest of the Barretto sisters got married last March 27, 2006, but Gretchen was nowhere in sight. The latter's camp issued a statement months prior to the date of the wedding, stating: "Claudine had assured Ms. Barretto that her contrition was genuine [referring to the phone call made by Claudine on January 11, 2005] and would be accompanied by a public retraction and or clarification of the damaging and hurtful statements she had issued. This has not been done. Under those circumstances, Claudine's announcement that everything between her and Ms. Barretto is ‘okay' is a puzzling assertion, even as it is obviously incorrect."

Reconciliation—not yet fated to happen. During the anniversary dinner of YES! held last February 28, 2007, Gretchen kept mum when asked about her reaction should Claudine suddenly show up at the party. It was her friend Ruffa Gutierrez who answered for her: "Yung mga ganung bagay, dapat huwag pilitin. If it happens, it happens. At saka mas maganda kung magbabati sila in private, na sila lang dalawa ang mag-uusap at hindi sa isang showbiz event na gaya nito."

Reconciliation—final? Now the latest news is that Claudine and Gretchen had a chance meeting at a grocery store in Makati. Gretchen, according to the report of GMA-7's Nelson Canlas, cried buckets of tears. In the exclusive interview of Nelson, Claudine said, "I don't want to go into details, kasi siguro matagal naming hinintay ito. Mas maganda yung sa amin na lang muna 'to."

"It was a very emotional and it was a very, very good meeting," the actress of Walang Kapalit also revealed.

Final or false alarm? PEP has yet to get the official statement of Gretchen.