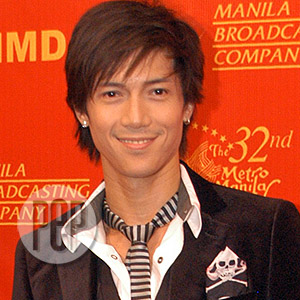 
When actor Rustom Padilla received his Best Actor award from the Tanglaw Awards for his role in ZsaZsa Zaturnnah: Ze Moveeh held in a school in Las Piñas City on March 1, 2007, little did he know that a simple observation of reporter Morly Alinio, who interviewed him on cam, is something that he had to take seriously.

Positive! His right eye seems smaller than his left eye.

The following day, Rustom confided to us that something must be wrong with him. He went to see his doctor, but he would still have to undergo some tests and rest.

Days and weeks passed but we haven't heard anything from Rustom. The only message he sent us was that he needed to take a lot of rest and he had to undergo several therapy sessions.

Then on March 11, Rustom sent a text message saying that he was not feeling well. He still was under observation and had to take several more therapies. His last text to us was on March 16 stating that in the next three weeks, he will have undergo non-stop therapy.

And for a while, Rustom was quiet again. People were already asking about him and his acting manager would tell that he is sick and he has to rest.

On April 17, we received another text message from Rustom, saying, "Just got back from out-of-town. Left my phone here in Manila. Dami mo na-text. Thanks for the concern. I'm well now and ready to work. Thank God, the endless therapy worked. Pantay na ulit mukha ko."

He is happy that the simple observation given to him—which he admits irked him at first—turned out something he had to thank Morly for. If not for that, he would have been struck by Bell's palsy (the same condition that struck Jan Mairni's husband, Gerard Pizarras, sometime ago). The signs and symptoms which are weakness on one side of your face, facial droop and difficulty with facial expressions, facial stiffness or a feeling that your face is being pulled to one side, headache, to name some.

According to an article we read about Bell's Palsy, it's cause is still unclear and it's development isn't well understood. Each facial nerve controls all muscles on one side of your face, except for muscles involved in chewing.

Good thing Rustom looked into the matter the soonest possible time and was immediately treated and was prevented from getting worst. Now, he's raring to face the cameras once again.