Dawn Zulueta steps out of the shadows 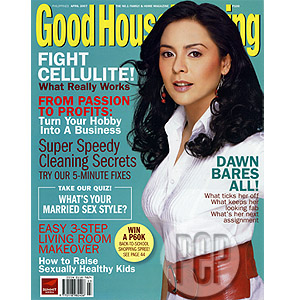 Three-time FAMAS awardee Dawn Zulueta gives Good Housekeeping an idea on how she manages being a working mother and a showbiz personality all at the same time.

Marriage is more than the sharing of duties, it is a spiritual relationship—the union of two souls.

No one seems to understand this better than Dawn Zulueta when she decided to marry into a prominent family. The April 2007 issue of Good Housekeeping reveals how the prized actress manages to maintain her individuality after marrying Davao businessman Anton Lagdameo.

This December, the Lagdameo couple celebrates a decade of marriage. It has not been easy for Dawn to juggle her duties as a housewife and the demands of her showbiz career. In fact, she tells GH that marriage is like "walking on a tightrope," a balancing act that a couple needs to work at as long as they live.

Even though Anton has his own political ambitions, the multi-awarded actress makes sure that she does not rest on her laurels. The 38-year old celebrity mom gives advice to married women about developing their own sense of self:

"Dapat sabay kayo. And you help each other that way. A very integral part in all of that is, while you're striving to be your own persons, it's also important that you always connect. You cannot drift apart. While you're evolving on your own, you must also still be evolving together as a couple.

Two years ago, Dawn and her husband were blessed with son Jacobo. Now that he is a toddler, Dawn is excited to explore the world with her bundle of joy. As a first-time mom, she is amazed by how little minds work, and how she should slow herself down sometimes, just to keep up.

Slowing down for Dawn means retreating to their hacienda in Davao in between commitments. The working mother still makes it a point to supervise everything in their household. "I'm very strict about rules, especially cleanliness," confides Dawn.

A lot of people are also amazed by how Dawn quickly got rid of her post-pregnancy flab. She is quick to point out that having discipline is key to maintaining a fit and healthy body. She guards her health not for reasons of vanity, but because she wants to keep up with an active child.

In the April issue of GH, Dawn enumerates the various tasks she hopes to achieve in the near future. With the way things are going for this hard-working wife, mother, image model and actress, she just might finish all of them soon!