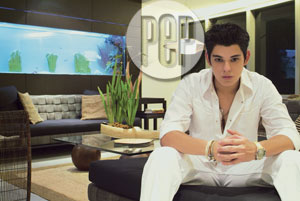 Richard Gutierrez purchased his 186-square-meter condominium unit, on the 16th floor of One McKinley Place, in mid-2004. He moved in last December 2005, a year and a half after Budji Layug and his team started on the interior design.

Matinee idol Richard Gutierrez is now the proud owner of a Budji Layug-designed condominium unit in the heart of Taguig's The Fort, currently the center of anything hot, new, and expensive in Metro Manila.

For someone who only decided three years ago that he wanted acting for a full-time job, Richard has certainly seen a lot of good things coming his way.

He says he thought of buying his own condo unit only in late 2004, when everything he touched—TV and movie projects and endorsements—seemed to turn into gold. After scouting around, accompanied by twin brother Raymond, Tinseltown's most eligible bachelor settled for this condominium unit in One McKinley Place, a 44-story high-rise.

Three years' worth of Richard's savings from earnings as a movie and TV actor, as well as from his endorsement deals, thus went into the present look of his condo. These savings were possible, of course, because Richard's family does not depend on him; his money is his.

It took Budji and his team a year and a half to execute Richard's specifications. Just about the same length of time that YES! waited for this exclusive shoot to happen (finally, it was published in March 2006 issue of YES!). Like Annabelle, we say: "It was worth the wait."