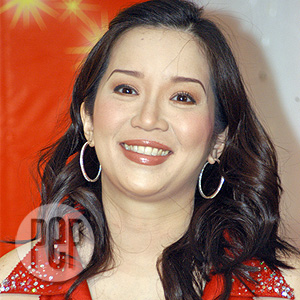 TV host-actress and her baby are doing well.

In an exclusive report, PEP (Philippine Entertainment Portal) noted that Kris went to the Makati Medical Center with James at around 1 p.m. for her regular check-up with her doctor, Dr. Grace Luna. The hospital is just a few minutes drive from Oakwood, where the couple are renting a place while their house is being constructed.

Soon after her consultation, Kris experienced labor pains and was rushed back to the hospital.

Here is the PEP (Philippine Entertainment Portal) chronicle of Kris Aquino's pregnancy and the birth of James Yap, Jr.

PEP, SEPTEMBER 18, 2006. "Sure na, sure na..." announced the ecstatic Kris Aquino yesterday, April 17, in her afternoon showbiz talk show The Buzz. The 36-year-old TV host-actress is pregnant with her second child. Her eldest child, Joshua, is with actor Phillip Salvador.

She expressed her utmost happiness: "Ang sasabihin ko lang kasi it's so different now from 12 years ago [referring to the time she was pregnant with Josh]. Noong time na yun, there was so much fear na anong mangyayari, ano kahihinatnan...

"And now there's just so much joy. Feeling ko lang na it's proof also na when you put everything in perspective, at kung naituwid mo yung buhay mo, maayos at masaya, and lahat ng tao masaya with you."

Though she reported that she had been experiencing night-time sickness and nausea, Kris did not take a leave of absence from her two daily shows, Game KNB? and Kapamilya Deal or No Deal. "In between kasi [ng takes], na-realize ko na if I eat crackers, like Sky Flakes, and fruits, hindi ako nagsusuka. So all throughout the day—kasi nagte-taping po kasi ako araw-araw, Monday to Friday; I tape for the shows and nag-a-advance na rin kami—so basta kumakain ako ng suha, pomelo, and then ponkan, and lanzones all through out the day, I'm okay."

"I also had a congenital scan para i-check kung okay 'yong brain, okay 'yong skull, 'yong skeleton, 'yong back," said the host of Game KNB?, Kapamilya Deal Or No Deal, and The Buzz. "I'm giving birth anytime May 6 to May 10."

She added, "And then they said, based on the scan, na two to three weeks bigger than what the baby should be, so mahaba ang legs, mahaba ang arms... so sabi ko okay na rin kasi by the time 22-23 ‘yong baby puwede na ako mag-retire, di ba? Magba-basketball na! Malaki na!"

PEP, FEBRUARY 22, 2007. Kris was brought to the Makati Medical Center because of false labor pains.

"False labor" refers to a pregnant woman's experience of irregular, mild contractions that do not cause the cervical dilatation necessary for childbirth. In other words, the abdominal pains are akin to those surrounding childbirth but do not actually lead to childbirth. "False labor" can be caused by stress, whether physical, pyschological, or emotional.

He added, "She is being advised by doctors to stay in the hospital for mga tatlong araw [para sa] kumpletong pahinga, complete rest."

Days before Kris was rushed to the hospital, controversy erupted over an alleged affair between James and former Belo Medical Group receptionist Hope Centeno. Showbiz insiders can only speculate about how the recent controversy surrounding Kris and her marriage may have caused the Kapamilya Deal or No Deal host extreme emotional stress.

PEP, FEBRUARY 27, 2007. Kris gave an interview to PEP about her pregnancy at the Maggi Magic Sarap press conference.

According to www.familydoctor.org: "Gestational diabetes is a type of diabetes that starts during pregnancy. It affects about 4% of all pregnant women. It usually begins in the fifth or sixth month of pregnancy (between the 24th and 28th weeks). Most often, gestational diabetes goes away after the baby is born."

PEP, FEBRUARY 28, 2007. Kris was rushed to the hospital for the second time. The TV host-actress was said to have felt a sudden pain in her stomach.

MARCH 4, 2007. Kris gave an official statement through The Buzz, an entertainment talk show she co-hosts with Boy Abunda, regarding her current health condition, her thoughts on the issues surrounding her marriage, and her leave of absence.

Her statement: "I'm writing this while still confined in Makati Medical, fearful about the condition and the ultimate survival of my son. Scared about how I'll make it through the coming months of complete bed rest, the truth is the one place I've always felt invincible was inside the studio. It is where I could excel; where in spite of my deepest hurts I could have several hours of joy. My safe haven because I love interacting with my guests and my players, and my staff showered me with support and care. Now, even the work that I've done on a daily basis is being taken away from me.

"My baby's heartbeat was weakening and my cervix has already dilated. He is barely 3 pounds at this point, and for the past two days, I've endured very painful steroid shots to help strengthen the lungs of Baby James and increase his survival.

"At least five times a day, my fingers are pricked to check that my gestational diabetes was kept in control to ensure that my baby's health is not put in further peril. My food intake is closely regulated and the only time I'm allowed out of bed is for bathroom privileges.

"I now say a temporary goodbye to all of you. In the coming weeks, my one focus is to be the best mom I can possibly be to Josh and his baby brother. The only way I can succeed at this is to leave the spectacle behind me and totally retreat from the public eye.

"Please know how I will miss being a part of your daily TV viewing. I've always said that my career's biggest blessing is that all of you who has tuned in to my shows allowed me to become a part of your family.

"And now, it's my turn to focus on the two people that really matter in my life, my two biggest blessings, my two sons—Josh and Baby James. At the end of the day, after all has been said and done, my ability to give them good lives is what matters most."

Baby James weighed 4 lbs. and was said to be doing well. Kris was advised to have complete bed rest and to stay away from sweets.

Kris is on her last term of pregnancy. On April 19, she is supposed to choose her date of delivery.