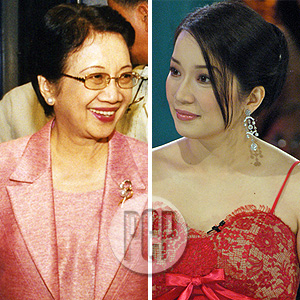 
Former Philippine President Corazon "Cory" Aquino was very happy and excited with the birth of her eighth grandchild, courtesy of her youngest daughter Kris Aquino.

Tita Cory was at the Makati Medical Center with Kris's husband James Yap and daughter Ballsy when Kris gave birth to baby James yesterday, April 19, at 4:50 in the afternoon.

"We're all very happy that Kris had her baby and it's a good thing the baby is okay. The baby seems to be okay because he cries very loudly," said Tita Cory.

Tita Cory also told GMA News that she phoned former President Joseph Estrada to greet him on his 70th birthday yesterday and at the same time to inform him of the birth of her new grandson. Baby James and Erap share the same birthday.

Tita Cory said that their incessant prayers paid off as Kris and James Jr. is now out of danger.

Tita Cory is now a proud grandmother of six grandsons and two granddaughters.

Baby James, who was born two weeks earlier—Kris's due date is on May 6—is now inside an incubator and is being closely watched by the doctors and nurses of Makati Medical Center.

In an interview with GMA News, baby James's pediatrician, Dr. Arnel Nuguid, said, "We had to put the baby in the incubator to stabilize the baby. Right now, he's just on oxygen."

Dr. Nuguid also said that baby James, who weighed 4.3 lbs., might have swallowed some of his own feces while he was till in his mother's womb.

"There is a risk na may na-swallow siyang kaunti. So we just have to monitor the baby and watch out for infection. But as of now, the baby's doing fine," he said.