Does Toni Gonzaga have a new suitor? 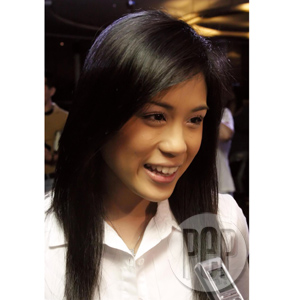 "Kinikilig ba ako? Siyempre kapag may bumibisita sa ‘yo... Kapag may dumadalaw sa ‘yo, you feel important. You feel appreciated," says Toni Gonzaga about the new guy in her life, Paolo Soriano.

Vhong Navarro dropped a hint about Toni Gonzaga's love life when the Wazzup Wazzup hosts were interviewed yesterday, April 18, during a press conference at Club O for their month-long anniversary.

In his characteristic style, funnyman Vhong made a cough sound that sounded a lot like "Direk." When Toni started reacting to his insinuations, the name of Jeric Soriano (son of the late actor Nestor de Villa), director of the movie Hotshots (1984) came up.

However, Toni was quick to point out that it wasn't Direk Jeric who is being linked to her. Another name was dropped—Paolo Soriano, who directed the station ID of the Kapamilya Network.

New guy? According to Toni, she met the son of Direk Jeric last year during a Gary Valenciano concert. But she cautioned, "I don't want to talk about it muna. It's something [that] I can't talk about muna siguro. I'll try to keep it private kasi private naman yung tao. Plus, I don't know yet where everything's so... I'm just taking everything slow."

According to Toni, she and Paolo went out just once or twice this year. When did they last see each other? "Nung Monday, nung dumaan siya sa Wazzup [Toni's show on Studio 23]," she points out.

No to showbiz boyfriend. With the appearance of a new guy in Toni's life, how did Luis Manzano—her Valentine date earlier this year—react to this new development?

As tinseltown's It girl, Toni has never run out of goodlooking guys being linked to her. She has been paired up with Sam Milby for the movies You Got Me and You Are the One. Aside from Sam, she has been linked to Piolo Pascual, Luis, and Zanjoe Marudo.

When asked about the possibility of being romantically involved with someone from showbiz, she declared, "Wala akong nakikitang magiging showbiz boyfriend ko."

Toni went describing the advantages of not having a boyfriend right now, "I'm very thankful na kahit papaano, even though that I've been linked to different partners, kahit papaano naman e, tinatangkilik naman nila kung sinong kapartner ko. Siguro, it's one of the advantages of not having a boyfriend or not being involved with someone. Free ka kung kanino ka pwedeng ipartner. Walang hassle."