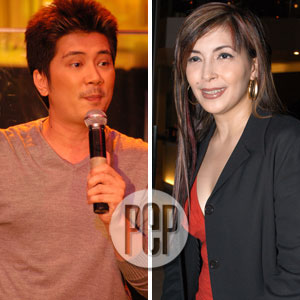 When the "stalker" issue came out, Janno Gibbs faced it with wife Bing Loyzaga (pictured). This time, the singer-host-comedian has a brewing tiff with Gladys Guevarra, and Bing is once again supporting his husband. Their relationship is definitely getting better!

"Why bring up something that has been long finished?" said actress Bing Loyzaga, wife of Janno Gibbs, about Gladys Guevarra's recent statements on television.

PEP (Philippine Entertainment Portal) reported that Gladys was annoyed with Janno, who uses her name for some of his punchlines in Nuts Entertainment. Janno has responded that he did not intentionally use her name in his jokes. He explained, "Nagpa-punchline lang ako 'pag naiipit ako, and I'm very responsible and sensitive with my jokes. I make sure hindi offensive. Alam ng viewers 'yan."

Bing reacted to Gladys's statement in a taped interview with Startalk last April 21. She said, "Ang luma na ng issue, di ba? Last year pa 'yan. I don't understand it. I really don't understand them. Why bring up something that has been long finished? And it's not naman na hindi kami pwedeng makausap, di ba? That's weird na lalabas ka pa on TV."

She added, "As far as Janno is concerned, pagkakaalam niya there's no issue. There's really no issue. It is something that napag-textan na nila, na naayos na nila. So kung mainit ang ulo ni Janno [ngayon] I cannot blame him."

Bing also said that Gladys could have approached them personally about her resentment instead of appearing on TV. Janno's wife said, "I am not answering dahil gusto kong patulan ang issue. I am just saying na sana naman tingnan niya ang ibang options how to communicate kasi...you know, it's not that hindi tayo nakaka-communicate-an, e, we can communicate, we have been."

Gladys stated that she got offended by what Janno was doing in his shows. With this, Bing did not take sides. Instead, she said, "She got offended? Siguro Janno has to do the right thing, 'no?"

On the other hand, Bing said that she and her family were also offended by Gladys's statements. The mother of two said, "In my case, for her to come out like that na rin, it's also offending for me. Also offending for me because, whether I like it or not, I am connected to Janno and we have two children. And it is offensive to my children."

Meanwhile, Janno chose not to comment about this latest kink in his severed friendship with Gladys. Instead, he just expressed his gratitude to his wife for being with him despite all the controversies he has been involved in.