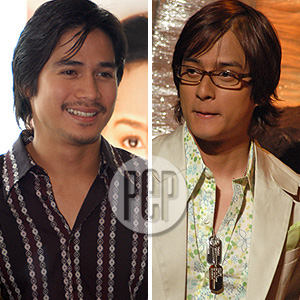 "It's nothing. Hindi lang naayos nang maaga at maganda. In God's time...," says Piolo Pascual about his tiff with Ryan Agoncillo.

Piolo Pascual is back on the boobtube with ABS-CBN's new teleserye, Walang Kapalit, which co-stars him with Claudine Barretto.

The actor says he is busy more than ever, taping thrice-a-week for Walang Kapalit and appearing on ASAP on Sundays. Though it leaves not much time for life beyond work, Piolo says he'd rather spend his infrequent spare time with his son, Iñigo, than date someone.

Aside from a zero lovelife, Piolo says things are in place.

PEP (Philippine Entertainment Portal) asks the heartthrob if he has resolved his long-standing tiff with Ryan Agoncillo—boyfriend of his on-screen partner Judy Ann Santos.

"Wala pa, but I had a dream about them [Ryan and Juday] na nagkaayos daw kami. I was in the States. You know, sana totoo ‘yon, e. It could have been real, mas maganda sana. Time will come. We'll be able to discuss everything. It's nothing serious naman, e. Sana lang dumating ‘yong time na ‘yon," says PJ, Piolo's nickname.

Piolo says he doesn't remember the details of his dream, only the unclear plot.

PJ explains, "One thing [that happened] was I apologized [to Ryan] and then we talked. Judy Ann was also there... After that, we became close pa. After that conversation, nagkaayos pa kami. Naging friends pa kami or something."

Unresolved squabble. The year 2006 reunited the loveteam of Piolo and Judy Ann in two projects: the romantic movie Don't Give Up On Us and the teleserye Sa Piling Mo. Unlike their past team-ups, Juday was already involved with Philippine Idol host Ryan Agoncillo. Talk echoed within the four corners of showbiz that the loveteam's on-screen romance was affecting Juday's relationship with Ryan.

In a press conference, Piolo was quoted as saying that he hopes that he is not causing any misunderstanding between Juday and Ryan.

Ryan issued a written statement through e-mail answering Piolo's comment: "1. Walang tunay na lalake ang magsasalita o makikialam sa relasyon ng iba; 2. Whatever happens between me and Juday is between us, and we are OK. And for Piolo to talk about my girlfriend outside work is rather ungentlemanly; 3. I learned that in a recent The Buzz interview with Piolo and Juday, Juday was caught by the camera saying "echosero" referring to Piolo , after she repeatedly brushed off Piolo's advances as soon as the camera lights went on. I just have this today. Next time I see him, I'll put him in his place."

Weeks turned into months. The spat has yet to be resolved.

For his part, Ryan said in an interview that he hasn't had the chance to talk to Piolo, and that he is willing to fix things in due time. He also said that he didn't want to force a reconciliation.

A Sign. PEP asks PJ if he sees the dream as a sign of an imminent reconciliation.