Iza Calzado's boyfriend chooses to settle in the Philippines 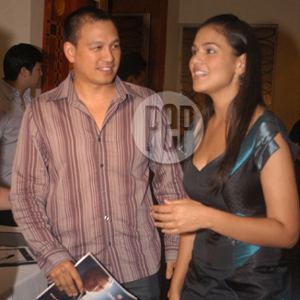 This May, Iza Calzado graces the cover of marie claire for the second time. She was chosen as cover girl of the maiden issue of the women's magazine in November of last year. In this photo, accompanying Iza to the marie claire event is her boyfriend Jerry Garcia.

After two years of maintaining a long-distance relationship with his celebrity girlfriend Iza Calzado, Jerry Garcia has finally decided to move into the country.

The music talent manager himself confirmed this when PEP (Philippine Entertainment Portal) talked with him during the Prix d'Excellence de la Beauté last April 25. The event was organized by Summitmedia's marie claire at the Le Soufflé in The Rockwell Club, Makati City.

According to Jerry, this move is part of their long-term plan for their future. The former resident of Los Angeles, California, says that his company will be incorporated here in the Philippines as well as in the United States.

For her part, Iza clarified that her boyfriend's decision to live here in the country does not signify that marriage plans are underway. "Hindi, hindi pa time. Magwo-work muna ako. Tsaka I'm about to start shooting for a new show [Impostora], so that's gonna take up a lot of my time. And I'm only 24, [turning] twenty-five," she pointed out. Jerry, on the other hand, is thirty-five years old.

ON IMPOSTORA. Iza shares more information about her upcoming show for the Kapuso network. "[My show is] called Impostora for GMA-7. We have Sunshine Dizon, Luis Alandi, Mark Anthony Fernandez, Alfred Vargas...Plus we have veterans, like Jean Garcia, Gelli de Belen, and Gary Estrada."

Dagdag ng dalaga, "Based on comics pala s'ya. So there could be a little bit of fantasy, here and there, pero not like Atlantika or Encantadia."

Iza also tells PEP about her special bond with co-star Sunshine. "Ang kasama ko, ‘yong isa sa pinakagusto kong kasama sa drama, which is Sunshine. She's a bit of a mentor sa ‘kin. Kasi when I entered show business, I really knew nothing. She has been in the business, I think, for twenty-one years of her life."

"I mean she's an expert already, if I may say so. And she's very generous with her talent and her knowledge. We have an emotional attachment, so it's easy to work with her. At saka nagkakaintindihan kami kapag yung mga lokohan namin. You know when you're with someone at marami na kayong pinagdaanan pag naglolokohan kayo, meron na kayong sariling language," she says warmly about her friend.