Ruffa and Yilmaz: The End of a Fairytale? 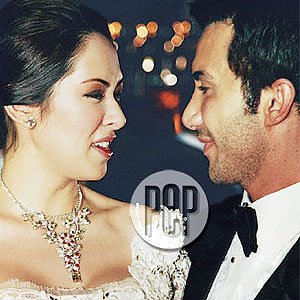 "I really couldn't ask for anybody else. I couldn't ask for anything more. He always says that he's proud to be with me. And divorce is never an option. This is the life that we chose, and we're gonna be together till the day we die," said Ruffa in an interview with YES! in 2004.

Just like all fairytales, let's begin this story with—once upon a time, a beautiful princess met a handsome prince.

Sharmaine Ruffa Gutierrez was crowned the Second Princess of Miss World 2003. The princess, daughter of Eddie Gutierrez and Annabelle Rama, had dreams bigger than herself. She conquered countries, armed with her wit and smile.

Yilmaz Bektas was the heir of a rich Turkish family. He is a prince in his own right, owning businesses that involved petroleum, trading, diamonds, and communication. He cheated death twice, surviving a motorcycle accident and a fall from the roof of a house. Maybe God or fate had other plans for him.

In Cannes, France, the princess caught the prince's attention. She was there to cover the Cannes film festival. He was there to buy a boat. With just one smile, the two fell in love.

Three years later, on March 25, 2003, a wedding fit for a royal couple was set in a world away—in Manila, Philippines.

With the onset of the war in Iraq, Turkey's neighboring country, the prince hopped from one city to another to fulfill a promise he made to his princess. He arrived only three days before the big day.

Unlike other fairytales, this union—four years and two kids later—didn't end with a "they lived happily ever after."

Last May 8, the Philippine Star's entertainment section carried the headline "Ruffa and Yilmaz to file for annulment" in Ricky Lo's entertainment column. Ruffa cited "cultural differences" as the cause of the separation.

A joint statement was released during the latter part of the day saying: "It is with much regret that RUFFA GUTIERREZ and YILMAZ BEKTAS announce their mutual decision to end their four years of marriage.

"Earnest and sincere efforts at saving their marriage have failed. It is to the best interest of Ruffa and Yilmaz, their children, and respective families that such decision to sever marital ties had to be made.

"All issues and formalities concerning the dissolution of the marriage shall be done in accordance with applicable laws in the most cordial, amicable, and private way possible for the benefit of all concerned.

"Ruffa and Yilmaz will remain committed parents and continue to be friends as they live their separate lives. They ask for everyone's understanding and consideration in respecting the family's privacy during this most difficult time. No further statements will be issued."

PEP (Philippine Entertainment Portal) details the triumphs and trials the couple has gone through the years.

YILMAZ'S FIRST PRINCESS? Days after the wedding, the Hurriyet, a Turkish newspaper, reported supposed details about the mysterious Moorish prince. The report described Yilmaz as the son of Haci Muhittin Bektas, an "international narcotics smuggler." He was also said to have another princess in his life, Selen Gorguzel—his alleged first wife. Yilmaz and Selen have a daughter together, Ilknaz, the article said.

Yilmaz, in an open letter to the media in 2003, explained the issues surrounding his marriage and family background: "I was married on 25.03.2003 for the first and last time to Sharmaine Ruffa Gutierrez. There was nothing solemnized in marriage with anybody else before such date. Therefore under the Turkish Civil Code, I have the right to solemnize a marriage for which I am fit in all respects. I had a daughter in 1999 from my ex fiancée, Selen, having duly registered the child in my census log under my family name. We have mutually terminated this relationship in a peaceful settlement as two modern individuals. Since we have a child, we have been maintaining our relations at an appreciable level...

"About the rumors that broke out about my father, Muhittin Bektas, his bank accounts with high deposits have been frozen due to alleged failure in making them declared. The trial has continued for about two years now. Since it was a big amount that was failed to declare, the press wrote speculative news predicting that such amount of moneys [sic] might have been earned from unfair deals such as gold, diamond, arms, drugs, and oil smuggling."

"We had a Christian ceremony in the Philippines, and then we had our Muslim wedding in Acarkent. It was the imam that officiated. It was basically a blessing. It wasn't like a wedding for show. It was a blessing for us to be together," explained Ruffa.

She added, "They [Yilmaz's family] gave me my Muslim name, which is Yasmeen. And sacrificed lambs to give to the poor children, and it was really nice."

Aside from the new religion, Ruffa also had to adapt to her new life as a wife.

"Yilmaz is very intelligent. He hates violence. He's always praying for peace. He wants to do something to help make a difference, which he said he's never done before. He's very responsible," described Ruffa of her husband.

From a self-confessed hardheaded woman, the princess was tamed by her prince.

A WORLD AWAY. "Maganda ang Turkey, especially during the summer," described Ruffa of her new home. "Even in the winter, it's nice... You can't see any bums in the street. It's very modern, very historical. It's a little bit of Italy, a little bit of Greece."

She struggled a bit with the language barrier at first, but being the intelligent woman that she is, she learned the language quickly.

She said, "People can't understand me! Most of the people, they really don't speak English. It's not like here in the Philippines, whether you're rich or poor, or middle class, 99 percent of the people are literate, you know... I know a lot of words [now]. I think I know a lot more Turkish than I do Spanish. You have to, e. Or else, you know, you'll be lost along the way."

She admitted that she does miss Manila.

"During ‘yong special occasions, di ba, like my mom's birthday, my dad's birthday, or Christmas? You know, things like that Yilmaz hates celebrating. Like, even for his birthday, tama na sa kaniya ‘yong isang cake, kumain kaming dalawa lang," she revealed.

Perhaps she missed Manila so much that on November 11, 2003, she decided to leave Istanbul for an unplanned vacation, her baby Lorîn and bags in tow.

Entertainment writer Edgar Cruz wrote: "With three-month-old baby Lorîn in a stroller, Ruffa Gutierrez-Bektas called mom Annabelle from Abu Dhabi Airport asking her to pick her up from there. She wanted to be at her birthday bash being held at the 42nd floor of a Pasig City high-rise but could not leave the airport.


"She left Turkey without husband Yilmaz Bektas' permission and could not decide what to do.


"What Annabelle did was ring Yilmaz who was then in London on a business trip. After calmly informing him of the situation, Yilmaz called Ruffa by mobile phone and asked her to return to Istanbul, of course, giving his permission that she could go on a two-week vacation in Manila with Lorîn."

In an interview with INQ7, she dispelled rumors of trouble in her marriage with Yilmaz: "The reason why Yilmaz and I had a disagreement was because ayaw niya akong payagan umuwi because, he said, we have to plan this. ‘Lorîn's still small, she's three months old, and it's just gonna be you and her on the plane.' And I said, ‘Naku, it's my mom's birthday, I just wanna surprise her, make her happy.' So I flew.

"When Lorîn and I got to Dubai, mukha na akong lantang gulay. My goodness, I was carrying her stroller, I was carrying her, I had two other bags! I was crying to my mom, ‘Can you get the next flight and pick me up?' Wala daw flights, two days pa. E, naubusan na si Lorîn ng gatas! And then Yilmaz was, like, ‘Just come back, come back!' My mom naman, ‘Ano ka ba? Nakalahati ka na ng daan, just come here!' Siyempre, I flew back to Turkey.

"I had no tampo. Tampo siya. Because bakit daw ako excited umuwi, you know? Bakit daw matigas ang ulo ko? I brought Lorîn daw without any help. So this time around, we did it the right way. We had my mom go to Istanbul, she stayed there for three days, pahinga siya. Then we came home together. So, it's okay pala to ask for help, it's fine."

She admitted that she does get lonely sometimes and she misses her family and friends.